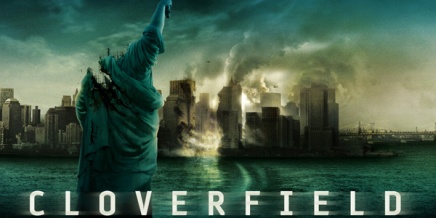 Whenever I’ve heard people talk about the movie “Cloverfield” they usual use words such as “disappointing” or “mediocre”. In light of that my expectations for the film were pretty tepid. But “Cloverfield” had something else working against it. I’m not a fan of the handheld ‘found footage’ technique that at one point had become wildly popular. For me it only works in small doses and more often than not it turns out to be a liability. So here we are, five years after the film’s release and I’m giving it a shot.

I have to say that as a whole there’s not a lot to “Cloverfield”. It’s very cut-and-dry. It takes no real chances. It has practically no depth to it at all. Yet it’s completely honest. It’s committed to its simple but clear vision. It nicely captures that 1950’s sci-fi B-movie vibe. Most importantly I was with it from the opening government archives “credits” all the way through to its rip-roaring finale. Is it the greatest thing since sliced bread? No. But I enjoyed it a heck of a lot more than I anticipated.

As I mentioned, “Cloverfield” is filmed using the ‘found footage’ method which means that weak stomachs may end up a but queasy. It starts off calm enough. The first 15 minutes or so of its tight 85 minute runtime is spent at a party introducing us to the central characters. Rob (Michael Stahl-David) is preparing to move to Japan. His brother Jason (Mike Vogel) his girlfriend Lily (Jessica Lucas) plan the surprise going away party in their New York City apartment. “Hud” (T.J. Miller) is tasked with “documenting” the party on video. And then there’s Beth (Odette Yustman), a girl that Rob has a tricky romantic relationship with. That’s really all you need to know about any of these characters and we get it all in the first few minutes of the film.

The movie picks up when the party is interrupted by a huge tremor. The first reaction is that it’s an earthquake but we quickly learn that’s not the case. I won’t go into heavy detail but let me just say that the huge old school creature feature fan in me was pretty excited. I think this is where the movie fell short for some people. This is clearly a classic tip of the hat to the big monster pictures of the mid to late 1950’s mixed with a popular modern filmmaking technique. Your enjoyment of “Cloverfield” will probably depend on how much that interests you or how much of it you can buy into.

Director Matt Reaves and writer Drew Goddard borrow from several older movies. My favorite are the television
newscasts taken straight from George Romero’s “Night of the Living Dead”. It’s here that we and the characters first learn about the deadly threat facing New York City. Things only get worse as the filmmakers throw us right down into the middle of the city in chaos. We’re take along with our main characters in what turns out to be a survival horror/science fiction. It’s simple but it’s at times exhilarating and it’s clever in its execution. The special effects are a blast and we get them in carefully measured doses. I also thought the performances were serviceable with the exception of T.J. Miller whose line reading is never all that convincing. He has an occasionally funny line but he’s mainly just your run-of-the-mill doofus.

There are a few other things that keep this from being a full-blown gem. There isn’t one hint of explanation in terms of the creature’s origin or makeup. It simply pops up downtown and the rest is catastrophic history. Now this was clearly intentional and it wasn’t a huge deal for me. But I still couldn’t help wanting to know more about this threat. Also, while the hand-held camera was more effective than in most films that have employed it, it’s still not my first choice for how I want to watch a movie. It’s also worth noting that “Cloverfield” was a really fun experience the first time through but it doesn’t seem to be the kind of movie that would have near the same effect the next time around.

Yet still I have to say I was surprised with this movie. I don’t agree with the common criticisms and I found myself thoroughly entertained. With its short running time it doesn’t overstay its welcome and it’s never misleading or pretentious. Sure it has some throw-away characters and you never get as much information as you would like. But it’s still a fun and well-made return to the monster movie genre that I still love to this day. In other words it delivered for me. I’m not saying it will have a long-lasting impact, but for 85 minutes I was glued to the screen and I soaked up every bit of what I was seeing.