In the not too distant future of Spike Jonze’s “Her” technology has made major leaps, fashion senses have eroded, and Hollywood’s cynical views of relationships have remained the same. Loaded with ambition and lauded by many as the best movie of 2013, “Her” incorporates a familiar science-fiction concept into what is more or less a love story and relational study. But it’s far from conventional or cliché. That said, it isn’t a film free of problems which (for me) ultimately keep it from being the modern day masterpiece that some are touting it as.

The story revolves around Theodore Twombley (Joaquin Phoenix), a nerdy introvert who works as a letter writer for people who have a hard time sharing their feeling. Theodore is a lonely soul. He’s currently involved in divorce proceedings from his first wife Catherine (Rooney Mara) and he hasn’t been able to get out of his ever-present state of melancholy. He has practically no social life and outside of his longtime friend Aimee (Amy Adams), there is no significant person in his life.

Theodore’s life takes a strange and unexpected turn when he purchases a new operating system for his computer. But this is no Windows XP. It is an adaptive artificial intelligence that evolves and takes on its own personality. The OS (voiced by Scarlett Johansson) goes by the name Samantha and soon develops a very personal and intimate relationship with Theodore. Samantha begins to fill the lonely void in Theodore’s life while he becomes her window to a new and exciting world. But the reality that she is an operating system causes him to wrestle with the legitimacy of their relationship.

The science-fiction mainly serves as a subtle backdrop with the exception of the familiar idea of computers becoming sentient. But Jonze deserves credit. He’s really doing a lot more here than first looks might reveal. He takes an interesting look at our infatuation with our gadgets and where that could perceivably lead us in the future. There is also a strong focus on communication or lack thereof. The film shows us several relationships that struggle due to the poor abilities to communicate. And speaking of struggles, prepare for a lot of them. In Jonze’s gloomy view of love, nearly every relationship struggles and has a rare hope for survival. 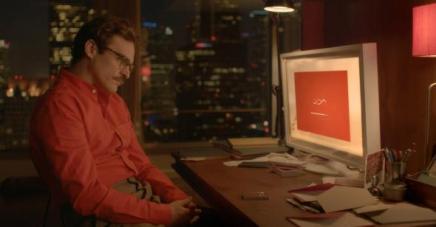 On the other hand, it’s the rich and unbridled conversations between Theodore and Samantha that causes their relationship to flourish. There are so many scenes of them just talking about simple things that may seem inconsequential but that are vital to making a relationship work. Phoenix is amazing and completely wraps himself up in his character. He displays an enormous range of feelings with such realistic fervor. And Johansson shows why voice work is deserving of more attention than it’s given. Her voice is sultry and sexy but it’s also warm and vulnerable. These two show a deep and growing attraction, yet even here we see Jonze use a little bait and switch.

But while I really appreciate Jonze’s originality and I love being challenged by deeper thought-provoking approaches, there were a handful of things that kept me from fully embracing this as a great film. First there is the movie’s glacial pacing specifically in the second half. The aforementioned conversations between Theodore and Samantha are good at first, but they reach a point where they no longer move the story along. The countless closeup shots of Phoenix laying on a pillow talking to Samantha well after their love has been established grew a bit tiresome. This only slowed things down for a movie that already had a calculated and deliberate pace.

The film also contains some unneeded scenes that added little to the movie. Olivia Wilde pops up as Theodore’s blind date. While her presence had a purpose, she was a very flimsy, throwaway character. There is also a weird scene where Samantha calls on a surrogate to serve as her physical body in order to be intimate with Theodore. It’s an intentionally uncomfortable scene laced with a touch of dark humor. But as it plays out things get sloppy especially with the surrogate character herself. And then there are these occasional odd tone-shattering attempts at humor. One involves a lewd act with a dead cat’s tail and the other features a cartoony video game character who suddenly spews a river of obscenities. This silly juvenile humor came across as cheap and both scenes felt completely out of place.

I wish I could toss aside those complaints because “Her” does many things right. It asks some great questions and it certainly allows for a variety of interpretations. For example take the ending. Depending on your interpretation it could be a very light and hopeful ending or a very dark and depressing one. I liked that. I love the work we get from Phoenix and Johansson and Rooney Mara’s character added a deeper emotional twist that I really responded to. But the film’s cynicism, the constant lingering of the second half, and some questionable script choices hurt my experience. It’s one of the few movies that captivated me yet had me checking my watch before it was done. Ultimately that’s a disappointing combination that pushed me away a bit.