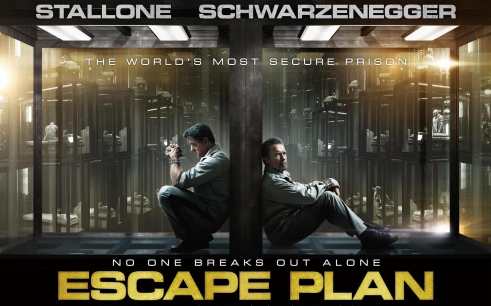 Ever since the release of “The Expendables” in 2010 there has been a resurgence of 80s styled action pictures. Arnold Schwarzenegger and Sylvester Stallone, the two biggest names from that once immensely popular genre, have returned to the big screen with a number of bullet-riddled movies. The two stars join together, bicep to bicep, to bring us the silly and implausible “Escape Plan”. But who would go to a Sly and Arnie movie looking for something with deeper meaning?

In many regards “Escape Plan” is big, dumb throwback fun. The entire premise is a bit goofy and writers Miles Chapman and Jason Keller trip over themselves in the telling of the story. But still, there is a nostalgic satisfaction that this movie provides. It hearkens back to ‘the good old days’ for these two stars. They have more gray hair, they’re slower, they need more camera trickery to make them appear like the big screen tough guys they once were. But both still have charisma and an air of confidence that makes this film fun even amid its occasional eye-rolling bad dialogue, gaping plot holes, and overall silly concept. 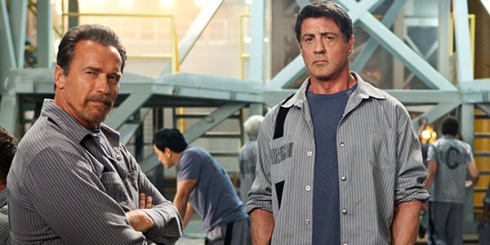 The story goes like this: Stallone plays a fellow named Ray Breslin and he wrote the book on prison escapes and I mean that literally. He is the head of a security firm that evaluates the strengths of maximum security prisons. How does he do this? He develops a false identity, has himself placed in the prison, and then breaks out. Helping him in this odd but apparently lucrative business is his skittish business partner Lester (Vincent D’Onofrio), his trusted associate (and possible romantic interest) Abigail (Amy Ryan), and a computer hacker named Hush (Curtis “50 Cent” Jackson).

One day Breslin and company are approached by a CIA operative (Caitriona Balfe) who wants him to test a top secret prison built for the worst criminals. It’s the mother of all prison breaks that comes with a healthy $10 million payday attached. Breslin decides the money is too good to pass up so he throws aside his standard safety protocols and allows himself to be captured, drugged, and transported to “The Tomb” (play ominous location music here). Once there he quickly learns he’s been set up and it will take the help of a surly fellow inmate named Rottmayer (Schwarzenegger) if he hopes to get out.

Swedish director Mikael Håfström does a fairly good job of keeping things moving once it gets started and there are some interesting twists along the way. The Tomb itself is pretty neat with its honeycomb glass cells and intriguing secret. The guards wear black uniforms and cool futuristic masquerade ball masks (although I’m not sure why). Then there is Jim Caviezel who is a ton of fun as the soft speaking sadistic warden. His deliveries and mannerisms offer an entertaining variation of a fairly familiar character type. And while Stallone is in serious mode most of the time, Arnie gives the film some humor. Amid his sometimes corny dialogue and patented wooden line reading, he tosses out some pretty decent laughs.

All of that sounds good but unfortunately the problems I mentioned earlier do stand out. You’ll have to accept its absurdity and understand that there are several questions you’ll never get sufficient answers for. The storytelling is a little sloppy in places, the dialogue a bit cheesy, and it doesn’t have many of those big moments that we’re used to getting from these fellows. But I still give the film some credit. Stallone and Schwarzenegger aren’t spring chickens any more but the fact that they still have those big infectious action-packed personalities says something. And that’s a big reason they’re able to make this film work.