Today I wrap up my look back at my favorite performances of 2014. The final category is Lead Actor and what a tough list to narrow down. There were so many incredible performances that I hated to leave off. But such is the nature of these things so without further ado let me introduce my choices for 2014’s best performances by a lead actor:

There was a lot of pressure and responsibility weighing on the shoulders of British actor David Oyelowo. In “Selma” he was tasked with portraying Dr. Martin Luther King, Jr. Many eyes would be on this performance and what they saw wasn’t merely acting. It was a man totally embodying a role. I was blown away from the start. Oyelowo completely loses himself in the character and throughout the film I felt I was hearing the actual words of Dr. King. The film trips over itself a bit, but Oyelowo never does. It’s a beautiful performance. 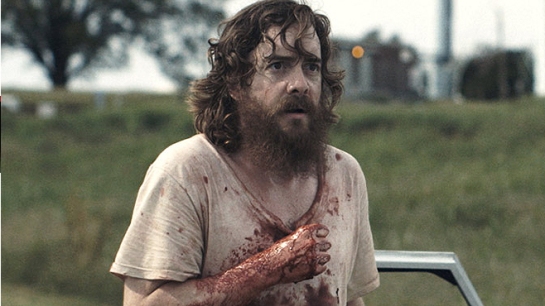 “Blue Ruin” was a wonderful surprise in 2014. So was the performance from its star Macon Blair. It is easily the quietest and most understated performance on this list. But that only makes sense. When you watch the film you realize that Blair’s timidity and uncertainty are key reasons the movie works. It’s a very unique and specific character requiring Blair to tell the audience just as much with his actions and expressions as with his dialogue. He nails every scene and helps make “Blue Ruin” the best thriller of the year. A great performance.

My gosh, Ralph Fiennes showed me something in 2014 that I never expected. I’ve always thought Fiennes was a fabulous actor, but he showed audiences a comedic side that I never knew he had. Starring in a Wes Anderson film automatically presents an interesting set of challenges, but Fiennes handles them with an unbelievable precision. His rapid-fire line readings, quirky mannerisms, and hedonistic style are simply perfect for the character of Gustave H. Fiennes is amazing and he has officially reached the ‘he can do ANYTHING’ stage.

Everyone is buzzing over Michael Keaton’s performance in the dark comedy “Birdman”. In fact, the performance has been so well received that many consider this a resuscitation of Keaton’s career. He is definitely the star of the movie and in typical Keaton style he gives us layers upon layers of his complex and off-beat character. Keaton has always been a talented actor. He just rarely got meaty and juicy roles that allowed him to show the many sides of his talent. “Birdman”gives him the opportunity and now the big awards are falling into his lap.

Most of you won’t realize what a shock this is for me. It has taken me a long time to get on board with Jake Gyllenhaal. I was always hesitant with calling him a good actor. But over the last few years he has made some fantastic choices perhaps none better than the role of Lou Bloom in “Nightcrawler”. He went all in to give us this weird, twisted, entrepreneurial sociopath. Gyllenhaal dropped close to 30 pounds and he has an uncomfortable appearance. But watching his expressions and seeing his warped ways of thinking is what makes him so unsettling. Simply put, this is a career performance for Gyllenhaal.