Filmmaker Michel Gondry has had his hands in all sorts of projects. He’s made music videos, short films, documentaries, and even television commercials. He has also made a handful of feature films of which I have seen two – the visually striking and potent “Eternal Sunshine of the Spotless Mind” and the painfully unwatchable “The Green Hornet”. His most recent film “Mood Indigo” falls somewhere in between the two.

I was really excited for “Mood Indigo” not so much because of Gondry but because of its cast which features some of France’s most recognized performers. Romain Duris, Audrey Tautou, and Omar Sy bring a huge spark to this strange romance fantasy, but they can only do so much. Gondry goes all-in creating his surreal Dali-esque dreamworld. He bombards us with it and within the narrow bounds of a two hour movie it’s just too much. 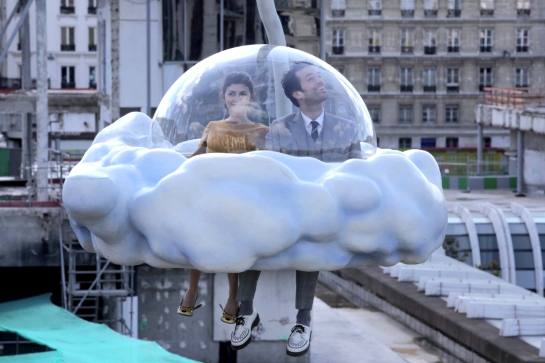 The film is based on “Froth on the Daydream”, a 1947 novel by Boris Vian. It tells the story of a wealthy and happy man named Colin (Duris). He loves his life. He loves the food and company of his cook Nicolas (Sy). He has a wonderful and trustworthy best friend Chick (Gad Elmaleh). Gondry shows us Colin’s life through a wild assortment of off-the-wall but playful imagery and gadgetry. This is important because it is truly intended to be a visual representation of Colin’s state of mind. The visuals grow more whimsical and colorful when he meets and falls in love with Chloé (Tautou). The two hit it off and in no time are married.

Colin and Chloé’s relationship drive the remainder of the film both visually and narratively. The two are madly in love and Gondry visualizes it in a number of vibrantly wacky and bizarre ways. But that changes when Chloé is diagnosed with a terminal illness. Not only does the story take on a more depressing tone, by the visuals go from bright and playful to dreary and bleak. It’s a direct reflection of Colin’s mood and state of mind as his life literally decays right before our eyes. It’s a fascinating stylistic approach that shows Gondry’s insanely cool creative side. 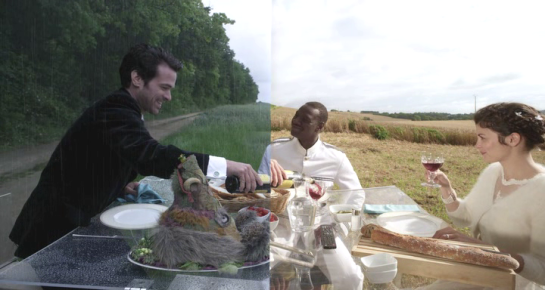 At the same time it is Gondry’s wild surreal world that is the movie’s biggest flaw. While the craziness does a great job of interpreting feelings it also goes overboard and becomes an annoyance. Gondry never pulls back and he sometimes smothers his story with his relentless imagery. Quite frankly some of it made no sense and came across as indulgent. I appreciate the film telling a good story in a very unorthodox way, but I often found myself distracted from the main story and at times uninterested in what Gondry was doing. Too much is too much.

Gondry’s stylistic excesses hurt the film but they don’t hurt the performances. Duris and Tautou have always been able to act with charisma and charm and it’s no different here. Both gracefully move from jaunty and merry to downcast and broken. But I had the most fun watching Omar Sy. He may be the most unique character in the film and Sy gives one of the best supporting performances of 2014. These three are joys to watch and they are the film’s most appealing components. As with the moving and poignant story, their performances sometimes get overshadowed by Gondry’s relentless visual wackiness. That’s unfortunate because ultimately that is what keeps “Mood Indigo” from being as good as it could have been.