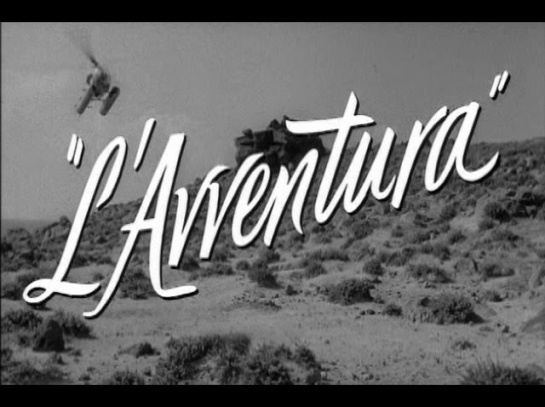 One of the many interesting things about “L’avventura” was how it was initially received. Michelangelo Antonioni’s Italian drama debuted at the 1960 Cannes Film Festival and was booed by the audience. After a second screening the film was received quite differently mainly from critics and Antonioni’s peers. It went on to win the Jury Prize and despite a wide range of reactions the film would become an international hit. Furthermore within two years Sight and Sound magazine had proclaimed it to be one of the greatest movies ever made. That quite a turnaround from how it was first received.

“L’avventura” is considered the first of a trilogy of films from Antonioni which also includes “La Notte” and “L’Eclisse”. Thematically the three movies seek to examine modernity and the disaffection and alienation it brings to his characters. They also share several stylistic similarities that Antonioni began experimenting with several years prior. Actress Monica Vitti is another common thread between the three films and it was her performance in “L’avventura” that made her a star.

Antonioni’s approach to making movies had evolved and he had grown uninterested in filmmaking conventions. He sought to break any conventional sense of visual storytelling and narrative structure. These aims are clearly evident in “L’avventura”. The film slyly presents itself as one thing when actually it’s something quite different. We are led along by the most clever of misdirections before having the rug pulled out from under us. Even the mischievous title tempts the audience into projecting their own expectations onto the story. There is a bold dramatic shift 30 minutes into the film and Antonioni not only changes his narrative focus but it alters the very perspective from which the story is being told.

The film’s first shot introduces us to the moody and melancholy Anna (Lea Massari). From the very start we learn she has a very aloof and disinterested view of life and particularly her reunion with her boyfriend Sandro (Gabriele Ferzetti). Despite Anna’s reluctance the two meet and head off on a yacht cruise to the Aeolian Islands with a group of wealthy friends. Among them is Claudia (Vitti), Anna’s best friend and polar opposite. Claudia carries herself with a playful energy and optimism. We see it in her excitement for the cruise and in her attempts to pep up Anna. She is unquestionably unique and at first Claudia almost seems like an outsider among her bourgeois company. 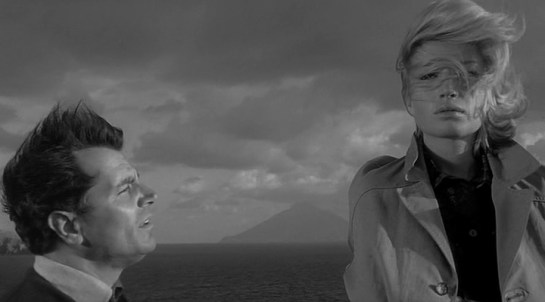 After a swim is cut short by Anna’s shark sighting, the group stops at the small rocky island of Lisca Bianca. Once ashore they all go there own way and explore. Anna and Sandro go off to themselves and talk about their relationship. Anna tells him she wants more more time apart, but a dismissive Sandro lays down and takes a nap. A short time later the group decides to leave the island as a storm approaches. Claudia wakes Sandro but Anna is nowhere to be found. The group scour the island looking for her but there is no trace. It’s here that Antonioni subtly begins to alter his focus and give his audience an unexpected perspective.

I’ll resist going into too much detail, but let’s just say the spotlight slowly moves from Anna to her companions. They continue their search, some staying on the island while others head out to a nearby town to contact police, but slowly a growing haze of indifference can be seen around them. A younger woman is more concerned with how unsatisfied she is with her older beau. Others don’t want to cut their cruise short. Later we see some of them more worried about potential business deals than the fate of Anna. Each move along with their upper-class lives with ease and Anna almost becomes an afterthought.

But then there is Sandro and Claudia. They put out the most effort to find Anna under the pretense of concern. But even they wander off into their own self-centered worlds. Antonioni follows them as they search a number of different locations but ultimately their focuses becomes something far more ignominious. It’s here that we see the uncomfortable undercurrent at the heart of “L’avventura”. Sandro and Claudia are poster children for the film’s perspective on the social and moral disconnection in the modern world. I’m dancing around the details, but giving too much away would cut the legs out from the story. 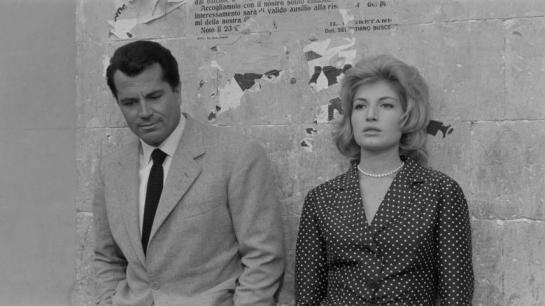 “L’avventura” is a visual masterpiece. The film is full of beautifully shot locales from the jagged, threatening island where Anna goes missing to the quaint small towns that Sandro and Claudia encounter during their search. But there is more to it than eye-grabbing scenery. Antonioni’s camera is always capturing a beautiful image or employing a clever angle. His ability to still his camera and allow the action to come to him and play out. There are no gimmicks. Just intelligently staged shots that are all about the location of the camera and the subtlest of movements. With his visual approaches he is able to change perspectives and even manipulate us into thinking certain ways.

Most criticisms of “L’avventura” have centered around it’s seemingly lethargic narrative. Some have said the film drags its feet and has nothing to say. I won’t deny it’s patient and deliberate pacing. Antonioni’s film stresses contemplation. But I simply can’t go with the idea that the film has nothing to say. And I also love that it bucks the conventional trends of the time – trends that are still very popular today. “Lavventura” doesn’t seek a conventional framework. It asks the audience the observe, think, and process. It is that type of engagement that makes Antonioni’s film a true classic.