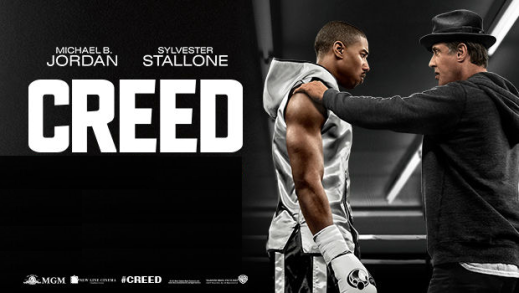 If you had told me at the start of the year that I would pay money to go see a “Rocky” spin off with old man Stallone training the son of Apollo Creed I would have laughed in your face. Nothing about that concept sounds appealing. If you would have told me I would not only see the movie but thoroughly enjoy it, I would have called you insane. Yet despite my closed-minded skepticism “Creed” turned out to be one of the bigger surprises of 2015.

A ton of credit can go to the film’s director and co-writer Ryan Coogler. You may remember him from 2013’s “Fuitvale Station”. Coogler reunites with his Fruitvale star Michael B. Jordan to give us a film that is one part spin-off and one part sequel to 2006’s “Rocky Balboa”. On paper this sounds like an all-around bad idea but Coogler does something special. Much like Fruitvale there is an earnest dedication to telling its story through human lenses. There is such a genuine humanity to the film that even when we get the big crowdpleasing moments, they feel completely earned.

The movie begins by introducing us to Adonis “Donnie” Johnson (Jordan), a young man living in the shadows of a troubled childhood. He is the son of the late boxing great Apollo Creed and born from an extramarital affair. Apollo’s widowed wife (Phylicia Rashad) finds Donnie in a juvenile facility and takes him in. She gives him a plentiful life and helps him get a good job with a promising future.

But there is a perpetual inter-turmoil inside of Donnie. He is filled with anger and angst that he releases through fighting. First it’s small-time fights in Tijuana, Mexico, but later he quits his job to go pro in hopes of carving out a name for himself. He heads to Philadelphia to seek out his father’s close friend Rocky Balboa (Stallone). He asks Rocky to train him but the aged former champ turns him down. Donnie’s persistence combined with loyalty to an old friend leads Rocky to take the young fighter under his wing. 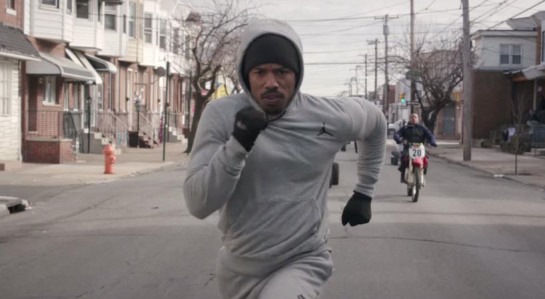 You could say Coogler is simultaneously telling two different stories. Donnie’s is a search for his own identity. He wants no part of his father’s legacy and he keeps him a secret. He wants to make his own name and plow his own path. But at the same time he needs guidance and stability in his life and in the ring. We genuinely like the guy because he is an underdog. That’s why audiences first embraced Rocky way back in 1976. Jordan has the same charm and authenticity to win us over.

But there is also the story of Rocky. Gone is his swagger and larger-than-life persona. Replacing it is a melancholy contentment with where he is at in this stage of his life. He’s tired, older, grayer and Stallone wears it truthfully and without an ounce of show. The physicality is gone yet Sly is given a lot more to do. It’s a deeper and dramatically meatier role and I would call it easily one of the best performances of his career.

Boxing is certainly a key part of this film, but it mainly serves as a support for the true meat and potatoes. Coogler is interested in his characters and their relationships. Every boxing scene whether training or an actual fight tells us more about Donnie or it builds up his relationship with Rocky. Then there are other characters like a local musician (Tessa Thompson) who Donnie falls for. She opens up an entirely different side of Donnie. But these relationships work because Coogler takes his time and allows them room to grow and breathe.

Coogler also shows a remarkable technical ability especially for a young filmmaker. There are so many things I liked about his presentation. There are several fabulous tracking shots that cleverly use lighting or darkness to give the appearance of long takes. And how many boxing sequences have we seen over the years? Yet Coogler’s slow-moving camera and his knowledge of when to pull the camera back and keep it still result in some exhilarating boxing scenes.

There are other impressive touches such as the way he shoots Philadelphia and the handling of the music (often teasing us with variations of Bill Conti’s original “Gonna Fly Now”). It all works to service the characters and their stories. “Creed” has its clichés and its big mandatory crowd-pleasing moments, but even they are handled well by a confident filmmaker who is a true rising talent. For Coogler this is a step up from the admirable “Fruitvale Station”. For Jordan it’s a bold ‘getting back on track’ after “Fantastic Four”. And for the 69 year-old Stallone it could equal and invitation to the Oscars. Now that would certainly bring a smile to my face.