You might say Hollywood’s selective forgiveness hasn’t fully extended to Mel Gibson. While the transgressions of many stars have been hypocritically swept under the rug, Gibson has remained a Hollywood pariah due to his vile alcohol-related incidents of nearly ten years ago. Despite apologies, treatments, and the support of close friends like Jodie Foster, Whoopi Goldberg, and Robert Downey, Jr., it has been tough road back into movies for Gibson. But the early responses to his new film “Hacksaw Ridge” may be a sign that Tinseltown is finally giving him a second chance.

Hollywood has tried to tell the incredible story of Desmond Doss for decades. Screen rights to the story have swapped hands numerous times and multiple producers have attempted to get the project off the ground. Mel Gibson was first approached to direct the film in 2004. He would turn down the offer twice before accepting some ten years later. “Hacksaw Ridge” would be Gibson’s first directed movie since 2006’s “Apocalypto”. 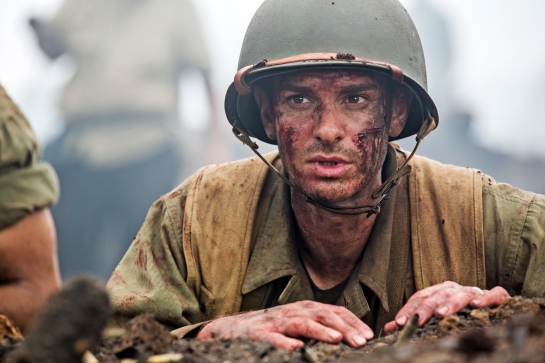 The story of Desmond Doss is astonishing. In April of 1942 Doss enlisted in the Army but refused to carry a weapon due to his deeply held religious convictions. Despite early criticisms and persecution, Doss worked his way up to Corporal and was a field medic during the bloody Battle of Okinawa. He became the first conscientious objector to receive the Medal of Honor.

Andrew Garfield plays Doss and is tasked with carrying the bulk of the film on his shoulders. Garfield is an actor who has always flown a bit under the radar despite some strong performances. In “Hacksaw Ridge” he brings the audience through several portions of Doss’s life. We see his early life at home and his tumultuous relationship with his war-scarred, alcoholic father (played with bruising realism by Hugo Weaving in some of the year’s best supporting work). We watch his courtship with a local nurse named Dorothy (played by a radiant and warm Teresa Palmer). The next stop is boot camp where Doss’s convictions raises the ire of his unit especially his superiors Sgt. Howell (Vince Vaughn) and Capt. Glover (Sam Worthington).

And then there is the final act which is dedicated to Doss’s heroism at Okinawa where some of the most ferocious fighting of World War 2 took place. From the first shot fired, the film presents the battlefield violence vividly and in a manner reminiscent of the D-Day sequence in “Saving Private Ryan”. Mel Gibson is no stranger to depicting the brutal nature of combat and it is especially effective here considering the harsh reality it’s based on. Make no mistake, it’s bloody, unflinching, and harrowing.

Some have found Gibson’s intense war violence at odds with his story of a pacifist. I couldn’t disagree more. Yes, the battle scenes are brutal and graphic but not without reason. You see, in the middle of the blood, the bullets, and the dizzying madness of war is Desmond Doss who personifies grace in the face of violence, life in a sea of death. Gibson contrasts the horrors of war with the heroism of Doss in such a way as to make his protagonist’s light shine even brighter. There is no glorification of war. These soldiers are in a picture of hell. The only light for them and the audience is Desmond Doss. It’s all incredibly effective.

“Hacksaw Ridge” was made with a fairly modest $40 million budget (quite modest compared to the $165 million price tag for the week’s other big release, Marvel’s second tier “Doctor Strange”). But as you would expect from Gibson, the movie looks like a billion bucks. The superbly shot battle scenes aside, Gibson’s traditionalist sensibilities show up in how he shoots everything else which is a perfect fit for this particular film. It’s easy to get lost in the period he visualizes.

But I have to get back to Garfield whose work in this film should catch a few eyes. His accent may require an adjustment, but he fully commits to his character and his performance is full of authenticity and earnestness. The movie simply wouldn’t work without him. And it certainly helps to have great supporting work especially from Hugo Weaving (Oscar nomination perhaps). I also loved Palmer who at times seems plucked right out of a 1940’s movie. Worthington is solid and Vaughan surprised me. There are also nice performances from Luke Bracey as the unit’s alpha male and Rachel Griffiths as Doss’s mother.

The story of Desmond Doss is both incredible and inspirational. “Hacksaw Ridge” tells the story well and never wavers from its central theme of believing in and staying true to your convictions even in the face of intense adversity. It’s never preachy in its presentations of one man’s beliefs, but it also never wavers in portraying them for what they are. And that’s what you expect from Mel Gibson  – a filmmaker of great vision and conviction who may have finally found the forgiveness he deserves. I hope so. “Hacksaw Ridge” shows he still has an amazing gift and an insight into filmmaking that many in the business simply do not possess.