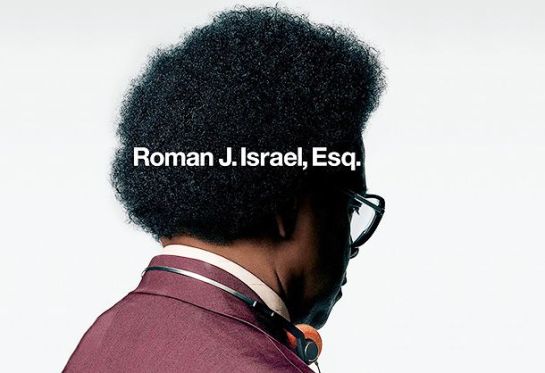 Some actors work on a higher and entirely different plane than others. I’m convinced Denzel Washington is one of those actors. Over the years Washington has shown himself to be in tune with his craft. So much so that even when the material he works with may not be the strongest, he has a way of making it better. Take his new film “Roman J. Israel, Esq.”, a legal drama that could have collapsed at several points yet you have Washington, injecting every scene with life.

That’s not to take away from writer/director Dan Gilroy. He wrote the part specifically for Washington and he’s well aware that his star is the linchpin. Similar to Gilroy’s first turn as directing, 2014’s “Nightcrawler”, this is an engaging character study and morality play revolving around an intriguing central character. It’s a great fit for Washington who enjoys digging deep into his roles. For Roman he gets to go full throttle. 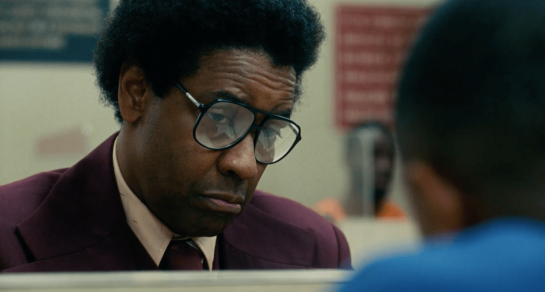 For 36 years Roman J. Israel has worked as the behind-the-scenes brains of a small, two-man Los Angeles firm. He’s an earnest go-getter with a photographic memory and an impressive history of civil rights defense. He’s also a bit of a wild card which has kept him in the office instead of the courtroom.

Washington pulls everything out of this fascinating, off-kilter character and then adds some flavor of his own. His Roman is rich with personality and is always operating within his own world. His eccentricities are evident from his lumbering stroll, unfashionable wardrobe, retro headphones, or his strong affection for peanut butter sandwiches. But it’s when Washington and Gilroy give him a voice that his peculiarities shine.

When his boss (who is also the face of the firm) suffers a heart attack, Roman is ready to take the helm, but he is blindsided when secrets begin to surface regarding his boss’ practices. Even worse, Roman learns the firm has been left in the hands of an ambitious hot-shot attorney George Pierce (Colin Farrell). With no plans to keep the practice running, George offers Roman a job at his big downtown firm out of pity. Strapped for cash Roman accepts, but in doing so is put face-to-face with the very things he has crusaded against.

Gilroy’s story puts Roman through some pretty tough situations which compound his frustrations. Does he stay true to his convictions or does he give in to the hand he has been dealt? Carmen Ejogo plays a civil rights activist who is intrigued and inspired by Roman. In many ways she plays his conscience – a representation of the ideals he has held close. Both she and Farrell offer up some good supporting work.

“Let us be enraged by injustice but not destroyed by it.” It’s a Bayard Rustin quote framed on the wall of Roman’s meager apartment. We revisit it a couple of times, each with a more stinging relevance than the last. It gets at the core of Roman J. Israel, a man of dignity but idealistic to a fault. Gilroy and Washington deftly open up this character’s quirks and complexities, and even when the narrative begins to wander Roman is still the focus. That alone was more than enough to keep me glued to the screen.