Am I the only one waiting for Gerard Butler to have that Matthew McConaughey-like renaissance? You know, where he lands that one movie that taps back into the talent that we once saw glimpses of before the cavalcade of hard-to-digest slop started churning out? Well, I hate to say it but “Hunter Killer” ain’t it.

Gerry Butler’s movies have almost become an absurd event for me. I would be lying if I didn’t admit to getting some type of weird entertainment value out of them. They’re routinely bad and always offer some level of goofiness to laugh at (most of the time unintentionally). “Hunter Killer” take a different approach. It nearly drowns in its own self-seriousness. That being said, here’s something funny – “Hunter Killer” isn’t as bad as it has every right to be.

Now let’s not get carried away. This isn’t the movie that puts Butler back on track. Simply put, it’s impossible to take any part of this three-pronged story seriously. And the further you go the more you realize that it’s doing nothing that you haven’t seen many, many times before.

After a United States submarine suspiciously disappears in arctic waters, first-time Commander Joe Glass (Butler) is ordered to investigate. He takes the USS Arkansas and his new crew to do some deep seas super-sleuthing. Not only does he discover the fate of the U.S. sub but he stumbles upon a sunken Russian sub that has been sabotaged from the inside. Among its lone survivors is a dignified Russian Admiral played by Michael Nyqvist. 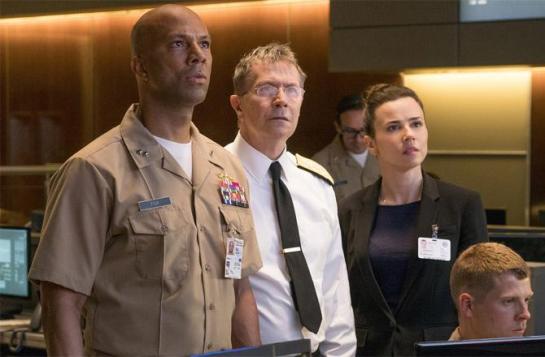 Meanwhile a four-man Navy SEAL team covertly airdrops into Russia where they are to secretly observe the goings-on at a suspicious Russian naval base. Their reconnaissance uncovers a coup led by a wild-eyed defense minister (Mikhail Gorevoy), so cartoony he could have been pulled from a late 80s comic book.

The third thread of this story takes place at the Pentagon where government officials scramble to make sense of all the intel pouring in from the Arkansas and the SEAL team. Gary Oldman grabs a quick paycheck as the Chairman of the Joint Chiefs while a stone-faced Common plays an Admiral with the emotional depth of a block of wood. Linda Cardellini gets a thankless role as a security advisor. Their roles consist of expressing various levels of concern as highly dramatic music looms in the background.

Nothing in this three-story structure works particularly well on its own. You’ll have a hard time finding an original idea or interesting character in any of the scenarios. But when they all come together it does offer up some mindless entertainment. The pacing is good (which is probably a smart thing) and there are a handful of good action sequences that injects a little welcomed energy. We also get another good performance from the late Michael Nyqvist. It’s one of his final roles.

But despite my ability to squeeze a little enjoyment out of “Hunter Killer”, it’s still a movie that sinks more than swims. Pretty much every thing it does is by the numbers and while some of the casting may catch your eye, they’re more or less doing the same – checking boxes and offering up the best super-serious mugging they can muster.