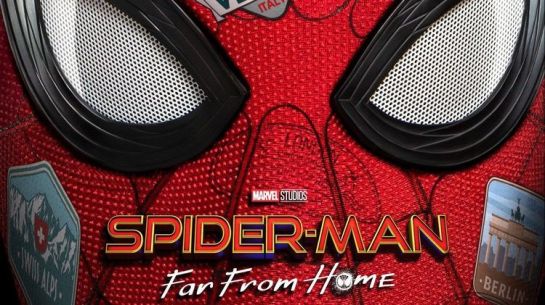 Remember back when Peter Parker was a ‘friendly neighborhood Spider-Man’? His stories were intimate, personal and tied to his New York City roots. Despite their faults, the two previous series captured that element of the character very well. The MCU has taken Spidey in a different direction. They are much more interested in Spider-Man the Avenger and connecting him to their sprawling cinematic universe. I kinda miss the old days.

“Spider-Man: Homecoming” saw the MCU rewrite many of Peter Parker’s most defining story arcs in order to both “modernize” the character and firmly tie him into their ever-expanding, multi-billion dollar cash cow. His second solo film “Far From Home” doesn’t exactly change course, but it does do several things that makes it a much better and more satisfying installment.

First, while it certainly doesn’t dramatically change Spidey (played by Tom Holland), the film stresses his desire to be a ‘friendly neighborhood Spider-Man’. In his first MCU movies we saw Peter Parker caught up in the excitement and allure of being an Avenger. The events of “Avengers: Endgame” have clearly changed his perspective and he struggles with his desire to be a kid again versus the responsibilities of being an Avenger.

Another welcomed change comes in the handling of some of the side characters. Tops on the list is MJ played by Zendaya. In “Homecoming” every second of her screen time was spent selling her as a rebellious, eccentric loner with few discernible human qualities. “Far From Home” strikes a much-needed balance with the character. MJ still stands out among her classmates, but she’s given more layers and is finally allowed to emote. The same with Peter’s best friend Ned (Jacob Batalon). He’s still there to add humor, but this film makes him feel like more than simply comic relief.

I credit many of these changes (rightly or wrongly) to a more compact and focused writing team. “Homecoming” had six writing credits while this film sticks with two – Chris McKenna and Erik Sommers. Along with returning director John Watts, they are tasked with wrapping up one MCU phase and kicking off another while also expanding Peter Parker’s story. The results are pretty impressive. 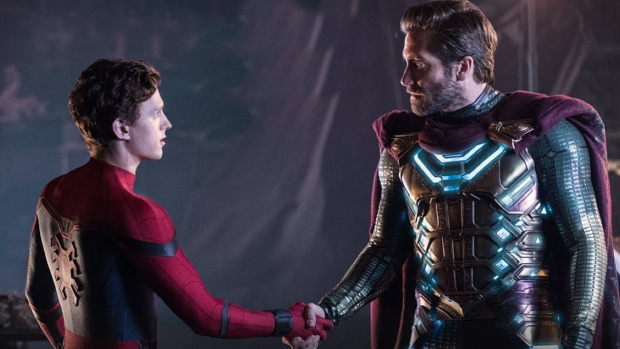 The story sees Peter trying to put the events of “Endgame” behind him by going on a class trip to Europe. No Spider-Man, no Avengers. Just a getaway to spend time with his friends and finally tell MJ how he feels about her. Easier said than done. While in Venice, Italy a huge water monster attacks the city but is fought off by the mysterious, super-powered Quentin Beck (Jake Gyllenhaal).

To complicate matters Nick Fury (Samuel L. Jackson) shows up. He and Beck (aka Mysterio) tell Peter that the water monster was one of four Elementals. The most dangerous (Fire) is projected to attack Prague and they need Spider-Man to help defeat it. Peter declines but Fury has a knack for getting his way. This obviously puts a damper on Peter’s desire for a life of normalcy especially when he finds out there is more to the Elementals than meets the eye.

Just as before Tom Holland proves to be the ideal choice to play Peter Parker/Spider-Man. His look, demeanor, earnestness, and naïveté all fit well with the character. It has always been the writing that has either helped or hurt him. Here (aside from a few small residual gripes) the writing and Holland click from the very start.

Back to the supporting side, Gyllenhaal is very good in what is a much different spin on Mysterio’s story. Jackson can do Nick Fury in his sleep. Jon Favreau returns as Happy Hogan and gets several fun scenes. The one remaining sour note for me is Marisa Tomei. Again, it’s no fault of the performance but the writing. Give me Aunt May over Sexy May any day.

“Far From Home” was a nice surprise and a welcomed step up from the previous Spider-Man film. It’s a breezy, light-hearted and fun MCU installment that adds depth to Peter Parker’s world while setting things up for an interesting third film (whatever you do, stay for both end-credits scenes). It may not completely cure all of my ills with the MCU’s changes to Spider-Man’s story, it certainly excites me for where things are at and where they are heading.