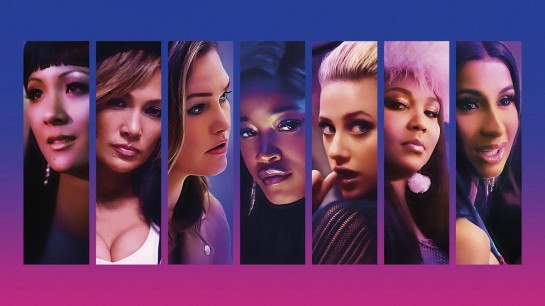 “Hustlers” is a movie both speaking to and benefiting from the current social and political climate. You see it touching on a number of current hot button issues that too few films are willing to tackle. At the same time just addressing issues doesn’t make a movie great yet it seems to be enough for some. And apparently some have even heralded “Hustlers” as a modern-day “Goodfellas”. Talk about getting carried away.

Exaggerations aside, “Hustlers” is a fairly basic crime drama that plays around with some good ideas but ultimately can’t quite get out of its own way. Wading through the movie’s excesses to get to the meatier story moments can be a chore. And fully embracing its supposed strong view of women as it hypocritically gazes at its stars’ assets makes it a hard sell. In a nutshell, this is weird and frankly shallow view of female empowerment.

“Hustlers” is written and directed by Lorene Scafaria and inspired by a 2015 article in New York magazine. It follows a group of cash-strapped strippers who begin hustling white and wealthy Wall Street brokers. The scam sees the strippers seducing their target, drugging them, and then maxing out their credit cards before they come to. It’s an icky scheme that seems to have the movie’s stamp of approval (at least up to a point).

Set in 2007, Constance Wu plays Destiny, the central character and the movie’s conscience. She’s a young woman who goes to work at a strip club called Moves in order to make money to take care of her grandmother. The star act at Moves is Ramona (a game Jennifer Lopez) who is a mother hen to the other strippers and who takes Destiny under her wing.

Wu and Lopez drive the story forward and their characters are the only ones who keep the movie afloat. Wu is really good outside of the strip club but feels out of place during the club scenes (partly by design but not entirely). Lopez falls right into her role and gives an intensely convincing performance. Strangely the script shortchanges her character of some much deserved depth. We get small snippets of her personal life but that’s about it.

The rest of the cast feels completely interchangeable and pasted into the script. Cardi B plays a lewd, foul-mouthed professional lap-dancer who up and vanishes after the first act (It’s essentially a glorified cameo). Lili Reinhart shows plenty of zest but is tagged with a lame and endless vomit gag (after about the third upchuck a lady near me in the theater uttered “Okay, enough of that. It’s not funny“). Reinhart deserved better.

It was fun seeing Julia Stiles again. She plays a journalist interviewing Destiny in 2014 about the events seven years earlier. The bulk of the story is told within the framework of the interview where Destiny talks about first meeting Ramona and what led to their crimes. We learn that after the financial crisis of 2008 the strip club loses much of its high dollar clientele. This means less money for the ladies so Ramona, Destiny and their crew put their plan in motion. 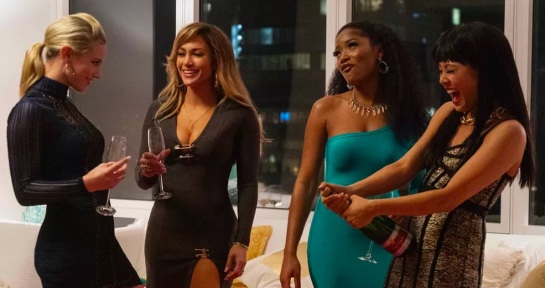 When Scafaria allows for more personal moments with her characters the movie hits its sweet spot. She also has a good sense of sisterhood and there are many times when that bond between the friends is palpable. But it doesn’t help to have such an over-reliance on slow-motion montages many of which resemble shots from a hip-hop video. It all begins to feel repetitive which is big reason the movie loses steam in the second half.

“Hustlers” is a hard movie to figure out. In many ways it champions the crimes of its high-heeled hoods and works hard to justify them. To a lesser effect it attempts to bring some degree of culpability (eventually) mainly through Wu’s character. She’s essential and without her few scenes of internal moral conflict this movie would be nothing more than a seedy fable built on the message ‘two wrongs make a right‘.

The wild acclaim for “Hustlers” got me thinking. Have we become so hungry for strong female-driven movies that we’ve lowered our standards and are willing to embrace certain films just because they check specific boxes? It’s an interesting question that should be rendered moot as more female-led stories are finally allowed to be told. It’s past time for that. But in the meantime “Hustlers” shouldn’t get a pass.