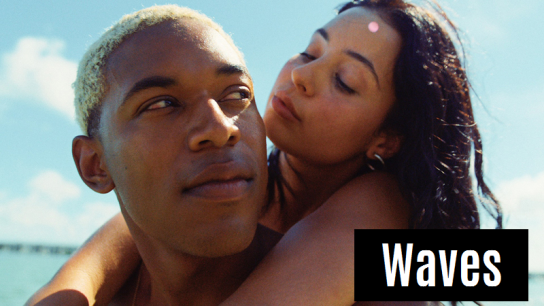 Three movies into his young yet impressive filmmaking career, Trey Edwards Shults has already showed a reoccurring interest. All three of his movies have the element of family at their center. His debut “Krisha” dealt with a deeply troubled and self-destructive woman attempting to reconcile with her family. “It Comes at Night” was a bit more opaque but dealt with a family trying to survive during a deadly outbreak. And now “Waves”, his most dense and thoughtful examination yet.

Right out of the gate you notice the confidence of the filmmaker and you quickly get the sense that “Waves” is going to be a movie full of ambitious choices. The unique visual language, the blossoming color palette, the entrancing score from Atticus Ross and Trent Reznor – it all speaks to a very precise vision Shults (once again serving as both writer and director) has for his movie.

The story begins in a happy place. Tyler Williams (a terrific Kelvin Harrison Jr.) has everything going for him. He’s a high school senior and an accomplished wrestler. He has a stern but loving father Ronald (Sterling K. Brown) and a compassionate, supportive stepmother Catherine (Renée Elise Goldsberry). He has a great relationship with his sister Emily (Taylor Russell) and he’s crazy about his girlfriend Alexis (Alexa Demie).

But “Waves” shows that even a life full of promise and security can change in a snap. For Tyler it starts with a serious shoulder injury that not only could threaten his senior season but his collegiate career. Instead of sharing it with his parents he starts popping pain meds, a bad decision that opens the door to several more. And when Alexis reveals she may be pregnant, Tyler crumbles and his downward spiral begins. Like a wave his seemingly perfect life crashes and the ripple-effect is felt throughout his entire family.

Through some brilliantly controlled pacing, Tyler’s unsettling decline intensifies before finally reaching an inevitable crescendo at the film’s halfway mark. Up to that point Shult’s gives us his best work to date before shifting to a much more subdued second half. With the exception of one scene Tyler vanishes and the focus moves to Emily. The effects of his story angle are still present, but the tension is dialed back considerably and the sudden change in direction is a bit deflating.

It’s not that the scenes with Emily are bad. Taylor Russell is a revelation and exudes the sweet and earnest qualities of her character. And in many ways what Shults is doing is impressive. In most of the film’s first half Emily is essentially lost in the background of her brother’s accomplishments, something that often happens to kids with a more accomplished sibling. But too much time is spent developing a not-so-interesting side relationship between Emily and her quirky new boyfriend (played by Lucas Hedges). While these scenes do open Emily up for us, they still left me longing for the far more potent fractured family moments.

Despite losing some momentum, Shults manages to pull it all together in a final 30 minutes that could be perceived as schmaltzy in a lot of other movies. But here it feels completely earned and offers a welcomed glimmer of hope. It works because Shults does such a good job giving us deep, layered characters. All four members of the Williams family are fully developed and have their own set of complexities. It would be easy to single out Ronald as the antagonist, but Shults’ script is far too savvy and his character treatment demands more than a simple surface reading.

“Waves” leans heavily on the performances and this is some of the best ensemble work of the year. Brown, Goldsberry, Harrison Jr., and Russell are superb fleshing out their complicated family dynamic while also giving us compelling individual characters to connect with. Shults gives them some meaty material to work with while also using distinct visual and sound flourishes to enhance the atmosphere. Some second half plotting keeps “Waves” from being a truly great film, but Shults has once again shown himself to be a shrewd and audacious storyteller.