Immediately after World War II the scars of German occupation ran deep across many European lands. One such place was the island of Guernsey, sitting in the English Channel just off the coast of Normandy. During the occupation many residents were taken and shipped to Nazi labor camps never to return while their families tried to survive under oppressive German rule. Guernsey was liberated in 1945 but the scars remained.

That troubling bit of history serves as a backdrop for the Netflix Original film “The Guernsey Literary and Potato Peel Pie Society”. Based on the 2008 novel of the same name, the story follows a London-based writer who becomes infatuated with a small book club from Guernsey. She’s drawn to the island in hopes of learning more about the five club members and their tangled history during the German occupation. 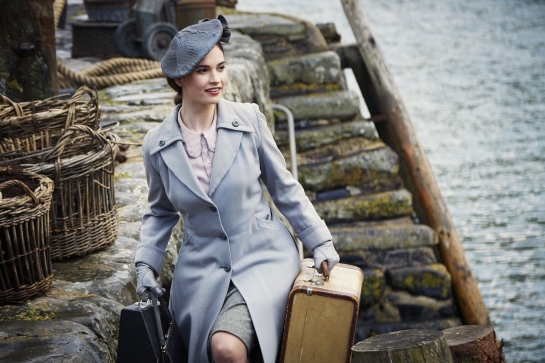 Set in 1946, a delightful Lily James stars as Juliet. With a couple of novels under her belt, Juliet’s writing career has taken off which pleases her encouraging publisher Sidney (Matthew Goode). She has signed on to write stories for the London Times and she has a wealthy American boyfriend (Glen Powell) who is quite keen on marrying her. Things couldn’t be better.

One day she receives a letter from a man named Dawsey (Michiel Huisman) from Guernsey. He had come across a book that once belonged to her and had shared it with his book club (you guessed it – The Guernsey Literary and Potato Peel Pie Society). His hopes are Juliet could steer him towards another book by the same author. She sends him a copy as a gift and writes back inquiring about the Society. And so their correspondence begins.

As Juliet learns more about the Society through Dawsey’s letters she is inspired to write about them. She travels to Guernsey to meet the small group she has become so enamored with. As she digs deeper into their backstory she uncovers some old but still painful wounds traced back to the German occupation. Some of the Society are willing to help her, most notably Dawsey (enter the romantic angle). Others want no part of the memories her questions bring back. 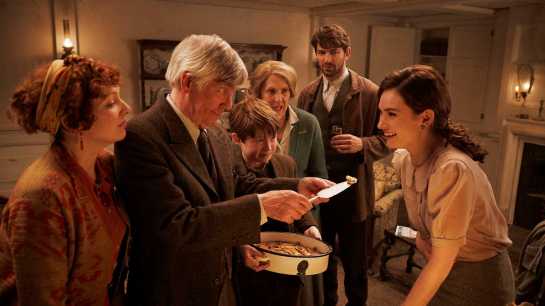 Director Mike Newell uses his camera to great effect, capturing beautiful vistas but also the swirling emotions of his characters. A really good cast fleshes out the unique personalities Juliet encounters within the Society, specifically Tom Courtenay, Penelope Wilton, and Katherine Parkinson. Each are given plenty of time to reveal more about their characters as Juliet’s investigation unfolds.

“Guernsey” could be called too simple and it hits a point where it becomes obvious how things will play out. Yet it’s still a warm and well-crafted story with a charming, old-fashioned flavor to it. Lily James sparkles in the lead role and a strong supporting cast breathes personality and emotion. I found it to be a nice, unexpected surprise and another good pickup for Netflix.