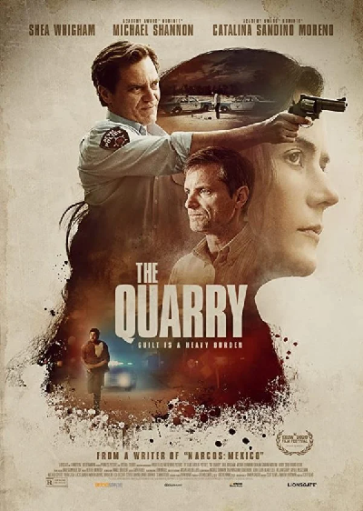 When the South by Southwest film festival was cancelled due to the COVID-19 pandemic a lot of movies missed their planned world premieres. One was “The Quarry”, a mystery thriller from director and co-writer Scott Teems. His last dramatic feature was the terrific “That Evening Shade” way back in 2009. His latest sees him back in a rural setting, a place where he clearly feels at home.

“Guilt’s a heavy burden, isn’t it? Most men can’t carry it alone.” That line comes near the start of the third act and nicely sums up a driving theme of “The Quarry”. Guilt is interwoven into the very fabric of Teems and his co-writer Andrew Brontzman’s story. It’s all over the place, guilt of all varieties, and nearly every character is weighted down by it to some degree.

The movie opens with the image of a house engulfed in flames. There’s no context for it whatsoever, but it’s there for us to stick in the backs of our minds for later. Next we’re in a beat-up van traveling down a rural two-lane highway with a whiskey-swilling preacher named David Martin (Bruno Birchir). He’s on his way to the dried up bordertown of Bevel to take a church pastorate when he comes across a man (Shea Whigham) near dead on the side of the road. He stops to help but his acts of kindness turn violent, leaving him crudely buried in a shallow grave at the bottom of a quarry.

The unnamed mystery man (literally listed as “The Man” in the credits) assumes David’s identity, takes his van full of belongings, and heads off for the preaching gig in Bevel. It may not sound like the most rational next move but for a man riddled with guilt and regret, what starts as a desperate cover story turns into a potential saving act of penance. But as a character rather pointedly reminds us later on, “The past is always with us.”

Once in town the pseudo preacher meets Celia (Catalina Sandino Moreno), a disillusioned local who provides room and board for the church. And little does the man know, he’s been marked by a 12-year-old named Poco (Alvaro Martinez) who scouts easy targets for his thieving, pot-growing big brother Valentin (Bobby Soto). The two loot the stranger’s van and in the process find something linking him to the quarry. Enter Police Chief John Moore (Michael Shannon), a bit of a miscreant himself, who oversees the investigation. He doesn’t like the brothers, isn’t crazy about preachers, and has a thing for Celia.

Despite having all of these combustible elements in place, “The Quarry” turns out to be a slow-burning southern noir that’s often content with just setting us down with its characters rather than spinning some thorny, tightly wound mystery. There is some genuine suspense especially when the real David’s body is discovered. And you have the lingering question about Whigham’s character. Is he a murderous psychopath or a well-meaning loner in over his head? Perhaps neither, maybe a bit of both.

Whigham’s understated approach doesn’t offer us many clues. And while I really like the performance, there’s not a lot of meat to it. We’re basically kept wondering about him until the very end when Teems tries to unload too much too quickly. Still the gravelly man-of-few-words method fits, veiling secrets but occasionally teasing us with glimpses of redemption. A baptism scene hints that maybe the man has found happiness while his straightforward plain-speak from the pulpit spurs growth in the congregation. Glimmers of light? Maybe.

Shannon’s Chief Moore is the exact opposite. Outspoken and transparent to a fault, Moore is an open book, ugly pages and all. He’s a man stuck in a rut and destined to stay there; trashing the very idea of an idyllic small town Americana and letting his own apathy effect his policing. It’s a role handmade for Shannon and grooved towards his strengths, much like the various characters he has played for Jeff Nichols. With this film many of the best moments are spent watching and absorbing two wily pros like Shannon and Whigham work out a scene.

You could argue that “The Quarry” is too pensive to be called a tense crime thriller and not deep enough to be considered a brooding, existential meditation. Yet I enjoyed the space it occupies in between the two as well as the ideas it explores. Can you have forgiveness without confession? Is there absolution without atonement? Can you ever really escape your past? Add to it the rich and rugged texture of the setting accompanied by the effective groans of Heather McIntosh’s aching score. They work together to maintain a bleak, melancholy tone befitting its characters and the dead-end roads they seem to be traveling.