Joe Carnahan first shared his “if Groundhog Day was an action movie” vision back in 2012, but in no time the project seemed dead in the water. Yet only a few short years later it was revived as “Boss Level”. Casting began in 2017, filming started in 2018. Since then Hulu dropped eight-figures to acquire distribution rights and now it is finally set for its proper release. Anchored by a strong cast but constricted by its relentless silliness, “Boss Level” turns out to be a bombastic and self-aware romp that marinates in hyper-violent absurdity. There is the occasional quiet interlude, but this is mostly wall-to-wall action excess.

It seems like just a few days ago that I was reviewing another time-loop movie yet here we are again. To Carnahan’s credit, with “Boss Level” he’s going for something a little different. In it Frank Grillo plays Roy, a potty-mouthed former Delta Force Captain with a penchant for heavy narration. He spends a lot of time explaining to us his weird predicament. In a nutshell Roy relives the same day over and over again, dying each time in a variety of gruesome ways – shot with a mini-gun, ran over by an 18-wheeler, blown up with a grenade launcher, beheaded by katana blade, and so on. After being killed he wakes up and repeats.

But Roy fights back, learning more details with each reset and then putting that knowledge to use against the eclectic gaggle of assassins out to kill him. He still ends up gruesomely killed each time, but he slowly finds a way to not only live longer but to begin piecing together clues to discover who wants him dead and why. One of the players is Naomi Watts as Roy’s ex-wife Jemma. I’d love to hear what drew her to this movie considering she’s handed a thankless role that sees her as more of a plot device to move Roy’s story forward than a layered character. Jemma is a scientist working for a shady businessman named Colonel Clive Ventor (Mel Gibson). Again not much depth to him either, but he’s made fun by the devilishly good Gibson.

I won’t say much more about the story because frankly there really isn’t a lot more to tell. We do get a side venture where Roy tries to reconnect with his 11-year-old son Joe (played by Grillo’s real-life son Rio). Otherwise it’s all about Roy putting enough pieces together to find who’s trying to knock him off while shooting, chopping, burning, and impaling anyone who gets in his way. And since this is a time-loop movie, we see most of these action scenes over and over and over again. So much so that the repetition gets a little grating. But it helps fill out the 100-minute runtime which would be a heckuva lot shorter without it. 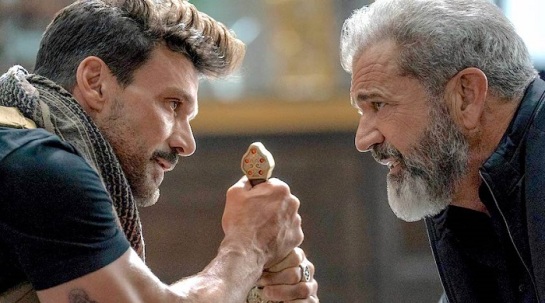 There are some fun and well-shot action sequences (at least for the first couple of times you see them) and the movie has a pretty good sense of humor. I particularly liked Selina Lo who plays a sword-wielding assassin enamored with her own goofy post-kill catchphrase “I am Guan-Yin, and Guan-Yin has done this!” And Grillo makes for a great action movie lead. Aside from the incessant narration and the steady stream of juvenile profanity (the script’s fault, not his), the chiseled 55-year-old has both the physicality and the snarky humor that nicely fits his character and the film’s wacky tone. And the cigar-chomping, mustache-twirling Gibson makes a paper-thin antagonist entertaining.

With “Boss Level”, Joe Carnahan takes an idea of what video games are, slaps on a hard R-rating, and stomps the accelerator, rarely taking his foot off the gas. But much like a frustrating video game, he forces us to constantly replay the movie’s levels (aka scenes), sometimes to the point of tedium. There is good talent involved, some high-energy action, and a few giggles mashed in with the nagging storytelling issues, ludicrous premise, and half-baked ‘science’ (even the filmmakers give up on making sense out of it). Ultimately your endurance level will probably define your experience. If you can turn off the annoyances and hone in on the strengths, you just might have a good time. But it’s kinda hard in a time-loop movie when those same annoyances continually reset just like Roy’s day. “Boss Level” premieres March 5th on Hulu.