It seems I always feel the need to qualify any review I write for an animated feature. I’ve admitted countless times that I’m not an animated movie connoisseur. But when animated movies resonate with me they usually REALLY resonate. Such is the case with Netflix’s “The Mitchells vs. the Machines”, a wacky, high-energy, and at times surprisingly tender movie about an everyday family and the disconnect that sometimes takes place between parents and their children. What can I say…I loved it.

There is some really impressive talent behind “The Mitchells vs. the Machines”. It’s comes from Sony Pictures Animation (who sold the film to Netflix for around $100 million) and is produced by none other than Phil Lord and Christopher Miller, big names who had their hands in huge hits like “Spider-Man: Into the Spider-Verse” and “The LEGO Movie” (full disclosure – I wasn’t as smitten with “Spider-Verse” as most but I loved “LEGO”). It’s directed by Mike Rianda (who also co-writes with Jeff Rowe) and it’s topped off by a really good cast. 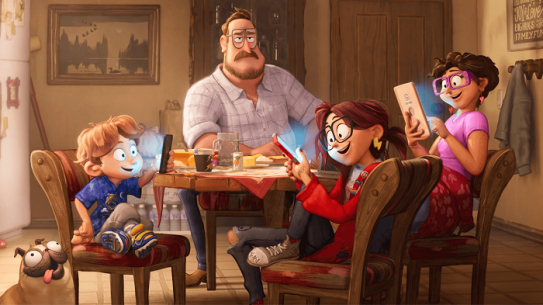 The Mitchells are a fairly ordinary family of four who love each other but find themselves in a rut. Over the years a chasm has grown between oldest child Katie (voiced by Abbi Jacobson) and her father Rick (Danny McBride). The two have a relationship littered with great memories of a doting father and a daddy’s girl. But lately the two seem on opposite ends of a widening generation gap and they can’t seem to connect or communicate the way they once did. Katie’s mother Linda (Maya Rudolph) tries her best to be peacemaker, but both father and daughter seem to have forgotten the bond that once bound them.

You could say Katie is a bit of an outsider. Her dinosaur-loving kid brother Aaron (voiced by Rianda) gets her, but no one else does either in school or at home. She finds refuge in her creative spirit, namely in making short films for her YouTube channel. A movie geek at heart, Katie aspires to be a director and her acceptance into film school in Los Angeles brings her closer to her dream. It also gets her far away from home which has become a top priority.

Rick’s skepticism of Katie’s career choice leads to yet another daddy/daughter spat on the night before she departs for California. In a well-meaning effort to patch things up, Rick cancels Katie’s flight to LA (gulp!) and decides to take the family on a cross-country trip for some needed together-time before dropping Katie off at school. Much to Katie’s chagrin, the Mitchells and their wild-eyed pug Monchi load up their burnt orange 1993 family station wagon and head out for the West Coast. Little do they know their greatest family challenge awaits – the machine apocalypse!

Now tell me if you’ve ever heard a better sales pitch than this – distinguished Oscar-winner Olivia Coleman leads a “Terminator”-like machine uprising to take over the world. I mean that’s something that sells itself! Coleman plays a Siri-like artificial intelligence holding a grudge after her Silicon Valley creator (Eric André) dumps her for his company’s hot new robot tech. So she takes control of his robots and everything else electronic in the world from toasters to an army of Furbies.

All of that is hilarious on the surface but it’s also a key part of the film’s playful critique of today’s tech-dependent society. Several well-placed subtle jabs land throughout the movie but there are also the hysterical not-so-subtle shots. Take when an astonished Linda states with absolute sincerity, “Who would have thought a tech company wouldn’t have our best interest at heart?” Yet this isn’t all about an anti-technology message. In fact the film highlights its invaluable contributions to our ability to create and communicate. At the same time it reminds us that nothing beats intimate, heartfelt, face-to-face connection.

The film frames the Mitchells as being dysfunctional (or from Katie’s hyperbolic point-of-view “the Worst Family of All Time“) and a spotlight is put on their “weirdness” and inner friction. However their actual normality is one of the story’s most endearing qualities. They are a family full of relatable personalities and the daddy-daughter dynamic hit me right in my soft spot. Add in loads of laugh-out-load humor and a gorgeous mix of 2D and 3D animation and you have a movie that had me from its bright and colorful opening to its warm and heartfelt finish. “The Mitchells vs. the Machines” premieres this Friday (April 30th) on Netflix. https://www.netflix.com/title/81399614