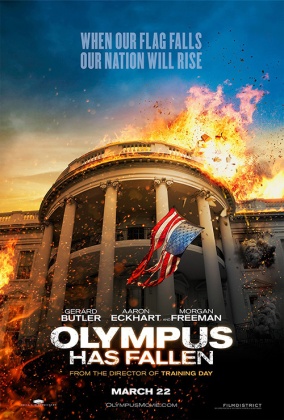 Let me preface this review by saying I grew up on the action movies of the late 1980s and early 90s. In some ways I cut my movie watching teeth on the films of Schwarzenegger, Stallone, Willis, and company – the same movies that Antoine Fuqua’s “Olympus Has Fallen” undeniably and unashamedly pays homage to. From the bullets and body count to the plot holes and conveniences, “Olympus Has Fallen” mirrors those old-school action pictures. But there is another much more important thing that it has in common with the older films. It’s one heck of a fun and entertaining time. “Olympus Has Fallen” knows exactly what it wants to be. It sets its target, aims for it, and hits it dead center. I’ve always appreciated when a movie does that.

Throughout the reviews I’ve read, there seems to be two main criticisms hurled at this film. The first is that it’s nothing more than a “Die Hard” knockoff. Others blast the film for its blatant flag-waving American patriotism. I find it funny that people have gotten hung up on these two things the most. “Olympus Has Fallen” has its share of problems both structurally and narratively. But these two stumbling blocks for some didn’t hurt my experience in the least. As a matter of fact in some instances they actually helped it.

Look, the “Die Hard” gripe has some merit. In fact you could call this “Die Hard in the White House”. A mysterious terrorist group with North Korean ties attacks Washington DC in broad daylight. It starts with an air assault from a modified C130 followed by a violent ground attack which leaves many civilians dead and the city in chaos. But their prime target is the White House which they manage to take control of in 13 minutes. So much for our impenetrable national security, right? The terrorists seem to have the upper hand except for one small kink – U.S. Treasury desk jockey Mike Banning (Gerard Butler).

Now you know how this works, Banning is much more than a pencil pusher. He was at one time President Asher’s (Aaron Eckhart) Secret Service head honcho and close friend to the First Family, but an uncontrollable tragedy cost him his job. But you can’t be a one-man army just by doing Secret Service work. Just like Arnie, Sly, and Chuck in so many of their films, Banning is also a former Special Forces Ranger. Like John McClane in Nakatomi Plaza, Banning is the lone eyes, ears, and muscle inside the enemy-occupied White House. The “Die Hard” comparisons are unavoidable but is that really a bad thing? “Olympus Has Fallen” is a much better “Die Hard” film than either of the last two “Die Hard” movies. And while this doesn’t do much in terms of originality, it nicely uses several of the key ingredients that made that franchise so great. 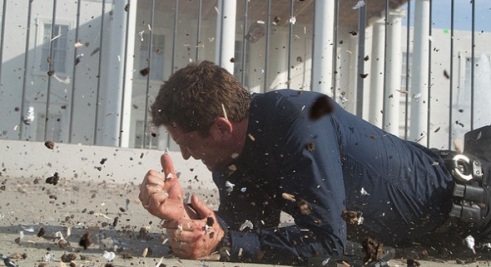 Then there’s the patriotism criticism. I guess I missed the announcement. When did patriotism become a liability or a weakness in a film. I can understand it becoming a problem when a movie beats you over the head with it, but that’s not the case here. There isn’t an ounce of subtlety in this movie’s pro-American spirit presentation but I don’t see why there has to be. As long as it doesn’t drown us in it. At one time there was an overload of ham-fisted patriotism in movies but that was a while ago. This was one area where the movie did feel surprisingly fresh. In other words the patriotic angle worked.

“Olympus Has Fallen” is helped by its nice supporting cast. Morgan Freeman is rock solid as always. He plays the Speaker of the House who is elevated to Commander in Chief after the President’s abduction. Melissa Leo was good as the Secretary of Defense even though she’s given a few pretty corny lines to wrestle with. I also loved seeing Robert Forster as a grumbling Army General and Angela Bassett as the head of the Secret Service.

But this is an action movie and the action is the film’s bread and butter. After a rather slow moving beginning which serves more as table setting, the action kicks in gear when the terrorists attack DC. Now I’ve heard a lot of criticism over the special effects but I don’t see it. With the exception of a few small hiccups, I thought the visuals were quite good. Maybe I got lucky but the DLP digital screen at my theater was ablaze with furious gunfire and massive explosions. The C130 attack, while preposterous, looked great and sucked me right in. There’s also a fantastic shootout on the front lawn of the White House that’s nothing more than old-school, bullet-riddled fun. Shootouts and hand-to-hand throwdowns continue throughout the rooms and halls of the White House with the percussion-heavy score amping up the macho intensity. Once the action starts you rarely have time to catch your breath. 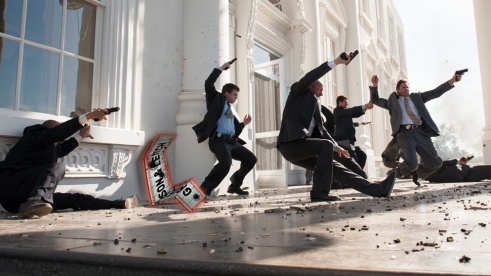 In an action movie like this one has to know it’s violent. But it should be said it’s really violent. Bodies drop at an alarming rate per minute and there’s no shortage of the red stuff. A lot of blood splatters through a huge variety of violent deaths. Be prepared for the numerous neck snaps, knife stabs, and head shots. Explosions are everywhere from jets and helicopters to buses and garbage trucks. Everything is fair game for Fuqua’s explosive experts.

As I hinted at earlier, this type of movie mandatorily requires some suspension of disbelief. You also must be prepared to deal with certain gaps in logic, tons of action movie cliches, and a few gaping plot holes. These things didn’t take away from the fun I had with “Olympus Has Fallen” but they are the kinds of things that keep it from being a truly magnificent film. There are several head-scratching moments that will pull you out of the film if you allow yourself to dwell on them. Why would the entire White House security code system remain the same even though people with access to them have been fired for a year and a half? Why do these and most other action movie villains insist on dragging out their missions instead of quickly carrying them out before the heroes have time to get in their way? I could go on. There are several in this film but if you can put it aside you’ll have a good time.

For me “Olympus Has Fallen” was a trip back in time through both the film’s high-octane action as well as with its predictable shortcomings. This was the real key to my enjoyment. There was a genuine nostalgic satisfaction as well as an appreciation for a film that sets out to be a specific kind of movie and never deviates from that goal. Now those who find testosterone-driven action flicks with fast moving kill counters to be relics from an outdated genre will have a hard time digesting this film. I can understand that. But this movie really surprised me, certainly not for its perfection, but for its rousing fun factor. There are tons of bullets, loads of explosions, and pride in the American spirit. For me, that’s not necessarily a bad thing and at the end of the movie I left with a smile on my face. Mission accomplished Mr. Fuqua!