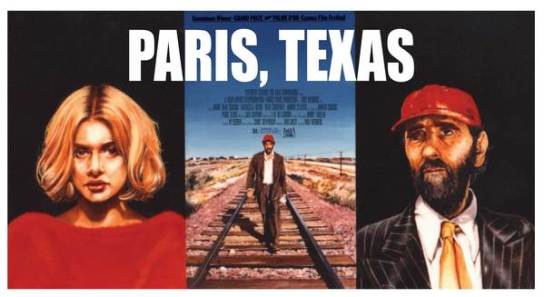 From the film’s first scene we know that “Paris, Texas” is something unique. A sprawling overhead camera combs a sparse desert landscape to the ominous twanging of an acoustic guitar. The camera settles on a thin, disheveled man with a straggly beard, dusty suit, tattered shoes, and a red ball cap. He drinks the last of his water from an old milk jug and then heads on his way.

Immediately we find ourselves asking a number of questions. Who is this man? Is he looking for something? Where has he been? Where is he going? He seems lost, like a wanderer. But at the same time he’s heading in a specific direction, his eyes fixated on the horizon. These early scenes highlighting the South Texas desert are filmed with an almost postapocalyptic perspective. The rugged and bleak terrain that Travis roams offers no sense of hope or life. This landscape is captivating and we are instantly drawn into the mystery of this man. 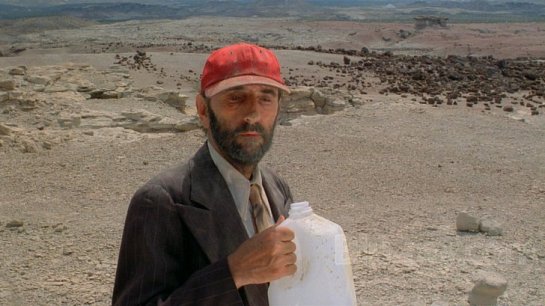 “Paris, Texas” was directed by German filmmaker Wim Wenders and written by “Kit” Carson and Sam Shepard. The film was a big winner at the 1984 Cannes Film Festival and over the years it has been heralded as a true film classic. The movie has often been singled out for its striking score from acclaimed guitarist Ry Cooder and its mesmerizing cinematography from long time Wenders collaborator Robby Müller.

After its brilliant setup, the story doesn’t leave us in the desert long. In a surprisingly brisk fashion the film begins feeding us morsels of information about this man whose name is Travis. He’s played by the great Harry Dean Stanton, an actor who has always been able to speak volumes through his expressive face. It turns out Travis disappeared four years ago and no one has seen him since. We learn that he had a wife and son but something happened and he lost them. In fact, in some ways this gets to the key focus of the film – loss, fear, insecurity, sacrifice.

The slow and methodical unveiling of information begins in the desert and then picks up when Travis is found by his brother Walt (Dean Stockwell). Walt, his wife Anne (Aurore Clément), and their son Hunter (Hunter Carson) each play a part in putting together this complex human puzzle that is Travis’ life. They are keys, each unlocking new portions of his backstory while also moving the narrative forward. Nastassja Kinski appears later to offer an even different layer to the Travis character.

The movie is basically broken down into three chapters. The first chapter follows the desert wanderer. The second chapter spotlights the time Travis spends with Walt and his family. The third chapter turns into an unexpected road trip. I won’t spoil a thing, but the film makes an interesting shift and the story sets its focus in a new direction while still maintaining its very grounded and cliche-free structure. The third act is the most fascinating and compelling even though it has a fairly glaring narrative hiccup and a couple of lapses in logic.

“Paris, Texas” has so many unique features that differentiated it from the majority of movies being made at that time. And the film’s captivating uniqueness still makes an impression today which is a testament to its quality. The cinematography is sublime, never using camera trickery or gimmicks. It visualizes truth and authenticity. The story is simple but emotionally rich and pure, again focusing on truth. It stumbles in a few places but never loses itself. Most of the performances hit every right note especially Stanton, Kinski, and young Carson. All of this is brought together under the management of Wenders who tells a living, breathing story free of contrivances and artifice.

The film never sets foot in Paris, Texas. It’s a mirage that sits in the back of Travis’ mind. It serves as a connection to his past. It serves as a small hope for a potential future. For a time it gives Travis a sense of direction, a purpose to follow. But over the course of the film we see Paris, Texas replaced. He finds a new purpose at least for a time. But Paris, Texas still lingers for Travis, and by the film’s end we fully understand its importance.