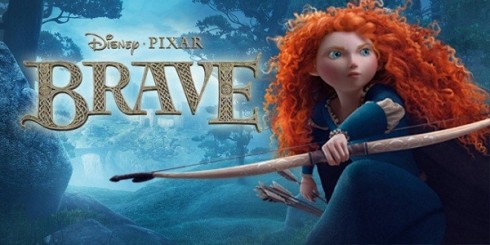 Does anyone even question the amazing filmmaking that comes out of Pixar Studios anymore? Well, “Cars 2” didn’t do them any favors, but still Pixar has evolved into one of the most impressive filmmaking teams in cinema. Me, I’m not the biggest animated movie guy. But even I can appreciate their amazing knack for good quality storytelling. That knack is once again on display with “Brave”. Once again Pixar gives us another solid animated feature mainly by following their proven formula. They take meatier subject matter and cover it with a beautiful and playful animated wrapping. They hire the perfect voice talent, create beautiful visuals, and throw in some fantastic music. This tried and true formula once again really pays off here even for a tepid animation guy like me.

“Brave”starts off with the perfect approach. The first thing it does is give us a true sense of location via some of the greatest uses of scenery and surroundings I have seen. Even though I knew it was animated, I was amazed by the huge, sprawling, panoramic shots of the Scottish Highlands. The film creates a breathtaking natural canvas that quickly places us within the story’s location and environment. Tall trees, grassy meadows, jagged mountains, and beautiful streams grab us and submerge us into this beautiful land. This gorgeous landscape is the home of a young princess-to-be named Merida who lives with her brave but playful father King Fergus and her stern and often times overbearing mother Queen Elinor.

Merida is an adventurous free spirit who loves archery and riding her horse through the countryside with her long, bright red locks of hair flowing in the wind. But her mother has quite a different vision for her. Queen Eleanor is infatuated with tradition and feels she knows what’s best for a young princess. A strong tension develops between the mother and daughter and it all boils over during a customary competition between three awkward princes from other clans vying for Merida’s hand in marriage. Merida wants no part of it so she hops on her horse and takes off. This infuriates the queen and sets in motion the events of the rest of the film.

The tension soaked relationship between mother and daughter is at the heart of the story. Something takes place later in the film, and I don’t want to give away what it is, that causes both of them to reevaluate their relationship. This is one place where I give Pixar a lot of credit. This isn’t shallow stuff. This is pretty real and heavy subject matter and they tackle it with sensitivity and smarts. And once again they’re able to walk that line between being faithful to the weighty material and keeping it within the bounds of a fun animated family feature.

But it’s not like this is a drab and overly serious film. This is a Pixar movie which means there’s a lot of fun and playfulness. King Fergus’ ‘typical male’ personality is a lot of fun. Even funnier are Merida’s rambunctious and mischievous little brothers – three little red-headed terrors who are always getting into something. I also loved the three Clan’s leaders and their sons. Talk about wacky! This peculiar bunch offered up some if the movie’s funniest moments. All of this worked for me but I have to admit that the heavy dose of slapstick silliness near the middle of the film began to wear me down. It seemed a bit monotonous and was pretty typical stuff. But this is a small part of the movie and things pick up on its way to its tender and rather satisfying ending.

“Brave” is another winner from Pixar Studios. It’s a powerful and relevant story wrapped up in gorgeous animation and one of the best soundtracks of the year. The characters come to life through great voice work particularly from Kelly MacDonald, Billy Connolly, and Emma Thompson. All of these components come together to form an entertaining whole and even though it does contain some of the standard cartoony moments, its impossible to watch this movie and not have a great time. This isn’t the best Pixar film but it’s certainly a very good one.

Want more great animation from 2012? Check out my review of the spectacular “Frankenweenie” .

Let me preface this review by saying that I wasn’t the biggest fan of the previously two “Men in Black” movies. But I was certainly in the minority. The first “Men in Black” earned just under $600 million at the box office. The sequel brought in another $440 million. Obviously expectations are high for this third installment and it’s $300 million budget. Both Will Smith and Tommy Lee Jones are back as is director Barry Sonnenfeld and Steven Spielberg as Executive Producer.

It’s been almost 10 years since we last saw Agent K (Jones) and Agent J (Smith). K is still the stiff-as-a-board, emotionless, straight-shooter, J is still a rapid-fire wisecracker with attitude to spare, and aliens are still on earth masquerading as humans. They both still serve as operatives working for a secret agency commissioned to protect the Earth from alien threats. This time their main threat is an alien named Boris (Jemaine Clement). Agent K apprehended Boris back in 1969 and put him in a lunar prison designed specifically for him. But Boris escapes and travels back in time to kill Agent K before he is able to thwart his original plan. After noticing K’s absence and a difference in the timeline, J travels back to 1969 a few days prior to K’s death to protect him from Boris.

The movie starts off looking and feeling just like a “Men in Black” film. Funny exchanges between K and J and alien confrontations get the movie off on the right foot. There’s also a really cool time travel sequence as J heads back to 1969. It’s here that the movie both introduces it’s biggest asset as well as hit it’s biggest speed bumps. Josh Brolin plays the younger Agent K and he is fantastic. I swear there were times where I completely believed I was watching a younger Tommy Lee Jones instead of someone doing a Tommy Lee impersonation. Whether it’s his accent, his nicknames, or facial expressions, Brolin nails a 29-year old Agent K.

But while Brolin shines, the story really spins it’s wheels. There are a few back-in-time set pieces and late 60’s details that are fun but they get lost in the story that’s really pretty flat and lifeless. The humor loses it’s pop and seems to rely much too heavily on Will Smith’s quick wit. There’s great chemistry between Brolin and Smith but even it gets bogged down in the sometimes drab exposition. I have to admit, I found myself struggling to stay focused and interested in what was going on especially when an all-knowing alien named Griffin (Michael Stuhlbarg) enters the picture. I did enjoy Emma Thompson and Alice Eve as the older and younger Agent O and the movie is a visual delight. I just wish there was more energy and substance to go with the movie’s stronger points. 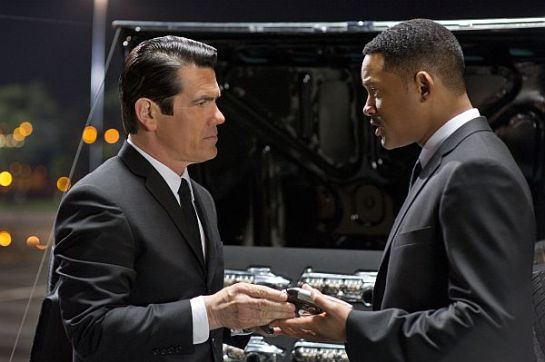 While I did have issues with the middle of the movie, it was almost made up for by a really good and surprisingly tender ending. There’s no way I can go any further without spoiling things, but I’ll just say that it makes you look at all three “Men in Black” movies from a different perspective. The ending is well conceived and even though there were a few questions that immediately came to mind, it really worked for me.

“Men in Black 3” most certainly isn’t a great movie but it’s definitely an upgrade over the almost unwatchable second film. Then again, that’s not really saying a much. MiB3 starts off strong and has a nice ending but it’s what’s in between that keeps it from being as good as it could be. Brolin is the highlight and he’s a lot of fun to watch. There are also some other pretty good performances. As I mentioned, the visuals are high quality, exactly what you would expect. But none of these pluses can outweigh the minuses. There’s just not enough substance or humor to make this anything more than an okay movie.