When Edward Albee’s play “Who’s Afraid of Virginia Woolf?” landed in 1962 it set Broadway ablaze. Its scorching, abrasive story of a middle-aged couple’s volatile marriage won Tony Awards but was stripped of its Pulitzer Prize for Drama due to its controversial content. It was perceived as a story that could be told on Broadway but could never be filmed due to the infamous Production Code.

But things were changing in Hollywood. Screenwriter Ernest Lehman was determined to keep the play’s coarse language and twisted sensuality in hopes of capturing the same initial shock of Broadway. He succeeded and “Who’s Afraid of Virginia Woolf?” is now known as one of the key movies of the 1960s that led to the abolishment of the Production Code. The movie became one of only two films to receive an Oscar nomination in every eligible category (the other being “Cimarron” from 1931).

Real life husband and wife Richard Burton and Elizabeth Taylor were cast to play George and Martha, a venomous, hard-drinking couple in marriage turmoil. George is an apathetic associate history professor at a small college. Martha is the bitter malcontent daughter of the college’s Dean.

After a late night campus party, Martha invites a young couple to their home for a nightcap. The guests are Nick (George Segal), a hunky newly-hired biology professor, and his mousy, reserved wife Honey (Sandy Dennis). George and Martha begin a caustic back-and-forth verbal assault. At first Nick and Honey are terribly uncomfortable by what they witness, but their hosts seem impervious to their rudeness or damaging words. At one point George flippantly explains “Martha and I are merely exercising, that’s all.”

As more alcohol is consumed the conversations grow more toxic and soon the young couple find themselves caught up in George and Martha’s games of emotional destruction. Through various stages of drunkenness the four scratch and claw at every sensitive scar revealing deep-rooted anger and boiling secrets from their pasts. Lehman’s script is deeply loyal to Elbee’s story. Within it no feelings are protected and no verbal assault is too vicious.

The film marked the directorial debut of Mike Nichols who was nominated for an Oscar but lost out to Fred Zinnemann (but no worries, Nichols would win the following year for “The Graduate”). Nichols wisely takes a more conservative approach to this material, trusting his four key players and allowing them to do most of the heavy lifting. But that doesn’t mean Nichols vanishes into the background. His hand is seen in several strategic camera techniques ranging from shot framing to camera movement. His direction never overshadows the dialogue, but there are instances where he accentuates it. 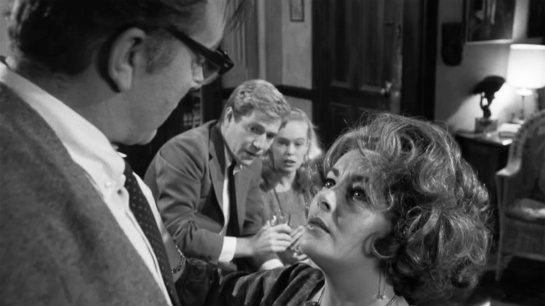 But when people talk of “Virginia Woolf” the performances most always top the conversation. The film earned Elizabeth Taylor her second Best Actress Oscar. Taylor dove headfirst into her character, gaining 30 pounds for the role, wearing a wig, and doing anything to shed her image as a beautiful movie star. Burton is equally good and brings a bruising passive-aggressive apathy to his character. Albee originally wanted James Mason but later admitted Burton was fantastic. Both Segal and Dennis also received Oscar nominations (Dennis winning her category) and each add their own unique and specific component to this dysfunctional tale.

There is simply no denying the strengths of “Virginia Woolf”, but your overall enjoyment may depend on your tolerance levels. This is 135 minutes of relentless verbal and mental cruelty. It’s a mean, acidic, piercing drama featuring one combustible scene after another. But the longer you stick with it the more layers are stripped away from the characters – the more we learn about them. And eventually the film asks if we are so different. Perhaps George said it best when watching Honey scratch the sticker off a bottle of brandy – “We all peel labels.” How true it is.

Lying at the cold calloused heart of “Sweet Smell of Success” is an acidic but thoroughly intriguing relationship. There are a number of things that set this film apart and distinguish it as something special. I’m talking in front of and behind the camera. But the driving force and its lasting aftertaste comes from the pungent and destructive relationship between a powerful New York newspaper columnist and a smarmy press agent.

The film is based on a story by Ernest Lehman that first appeared in Cosmopolitan magazine. Film rights were acquired by Burt Lancaster’s production company and Alexander Mackendrick was brought in to direct. By that time Lancaster had a lot of pull in the film industry and was considered an intimidating presence. Lehman had turned down an offer to direct the picture because of Lancaster. Even Mackendrick found filming to be stressful.

Lancaster plays J.J. Hunsecker. The character is said to be inspired by renowned syndicated columnist Walter Winchell. The film came out while Winchell still held considerable persuasive power. His daily columns were read by over 50 million people and were carried by over 2,000 newspapers. But Lancaster also had clout and wasn’t afraid to push the project. The film unquestionably stresses the bad side of Winchell by giving us a character so intensely self-centered and morally repugnant.

Tony Curtis plays Sidney Falco, a small-time struggling press agent who basically lives on whatever scraps Hunsecker feeds him. In Hunsecker eyes Falco is an expendable source for information; a desperate and disposable puppet. Hunsecker knows that Falco isn’t above shady deals or unethical practices and he uses that to his advantage. Falco looks at Hunsecker as his meal ticket. At times he shows what looks like puppy dog admiration, but in reality Falco is just as devious, just as opportunistic, and just as unlikable.

As the film starts Falco is upset because Hunsecker has left him out in the cold and refuses to take his calls. We learn that Hunsecker’s sister Susan (Susan Harrison) has fallen in love with a local jazz guitarist Steve Dallas (played by Martin Milner). Falco has been tasked with breaking up the relationship but so far has failed. Hunsecker has refused to promote Falco’s clients in his column until Dallas is out of the picture. This simple thread of plot makes up the main story, but the true focus is on the relationship between two repugnant individuals.

Lehman and Clifford Odets wrote the screenplay which is as brilliant as it is toxic. The dialogue is rich with razor-sharp discourse and verbal jousting. The characters talk with a twisted poetic flow especially Hunsecker. He constantly speaks as he writes – in cruel and piercing metaphors. Lancaster gives us so many memorable lines my favorite being “I’d hate to take a bite outta you. You’re a cookie full of arsenic.”

This was a big film for both Curtis and Lancaster. Up to that point Curtis had made his way as a Hollywood pretty-boy. He fought hard for the role of Falco in hopes that it would earn him respect as a dramatic actor. That’s exactly what happened. Lancaster’s films had given him the reputation of a true all-American boy. “Sweet Smell of Success” was a striking departure much like Henry Fonda’s vile, villainous turn in “Once Upon a Time in the West”. It left audiences shocked.

Watching the film you notice so many impressive touches and striking details. It was shot by James Wong Howe who utilizes the city in a variety of ways. Howe incorporates strategic lighting, clever camera tricks, and an amazing visualization hectic New York City life. Much was shot on location during extremely busy times and also at night which adds to tone the story is shooting for.

There is nothing pretty or uplifting about the story “Sweet Smell of Success” is telling. There is nothing redeeming and respectable about its cruel and shameless lead characters. But in terms of wickedly smart and thoroughly compelling filmmaking “Sweet Smell” is top of the line. Even more impressive, the film is nearing 60 years-old yet it’s still as potent today as it was then. The performances, the direction, the cinematography, the script – they all still sparkle which is a testament to the film’s greatness.