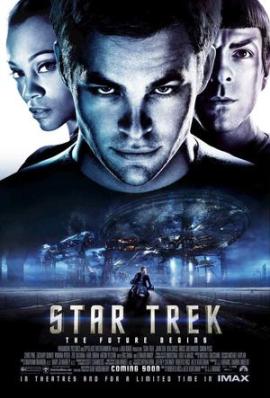 The summer movie season is off and running and one of the year’s most talked about releases is due out in a few days. I’m talking about “Star Trek Into Darkness”, the J.J. Abrams sequel to his 2009 reboot of the franchise. With so much hype and anticipation swirling around the new movie I thought it would be a good time to go back and revisit the first installment, a much loved film that I had pretty mixed feelings about. Would a second viewing give me a better appreciation for what Abrams and company were able to accomplish or would it simply reaffirm my initial frustrations with the movie?

First off, attempting to relaunch or reboot the Star Trek franchise is a pretty hefty and gutsy task. Perhaps only Star Wars’ fan base eclipses the passion and devotion of the group affectionately known as “Trekkies”. Tinkering with and altering the beloved universe first created by the late great Gene Roddenberry would be the equivalent to playing with fire and one would assume this was high on the list of the filmmakers’ considerations. Well I’m no Trekkie and I’m not as well versed in Star Trek lore as many, but I have say I’m surprised that more diehard fans didn’t have issues with the liberties and modernizations we see here. More on that later.

“Star Trek” is constructed as a completely new franchise launcher. It creates its own world beginning with the origin stories of the popular Star Trek characters Captain Kirk and Spock and telling how they and the crew came together through Starfleet. The film actually begins with a bang. A flashback shows the federation starship USS Kelvin investigating a lightning storm anomaly when it encounters a huge Romulan mining vessel converted to a warship. A battle breaks out forcing the Kelvin’s first officer (Chris Hemsworth) to evacuate everyone from the ship including his pregnant wife. He then manually flies the Kelvin into the mammoth enemy vessel causing a distraction so the escape pods can get away. This hero’s name was George Samuel Kirk.

The movie then fast-forwards and puts the spotlight on his son James T. Kirk (Chris Pine). He’s grown up to be a rebellious and rambunctious sort who is challenged to enter Starfleet by Christopher Pike (Bruce Greenwood), the Captain of the USS Enterprise who served with his father. While at the academy he befriends Leonard McCoy (Karl Urban), flirts with Uhuru (Zoe Saldana), and gets off on the wrong foot with Spock (Zachary Quinto). But in a familiar story turn that we’ve seen in everything from “Top Gun” to “Starship Troopers”, the cadets are forced into action when a distress call is made from Spock’s home planet of Vulcan. Through this we’re introduced to other familiar characters including Sulu (John Cho), Scotty (Simon Pegg), and Chekov (Anton Yelchin).

Eric Bana plays the rogue Romulan Nero who we see in the opening and who pops up later to serve as the main antagonist. He has a serious bone to pick with Spock and his revenge-fueled presence poses a major threat. Aside from the normal franchise origin stuff, this tiff between Nero and Spock is a big part of the story. There’s also the story of Jim’s evolution from an immature, self-centered hothead into a responsible, heroic member of Starfleet. All of these strands are woven together pretty nicely and the film moves through them with better pacing than I originally remembered. There are also some fantastic special effects and a cool new Enterprise with an impressive modernized bridge that I thought looked great.

But there were some issues I originally had with “Star Trek” that unfortunately didn’t go away with a fresh viewing. First, I know this is a relaunching of the Star Trek franchise and some of it is aimed at the action-starved audiences of today. But to me there were times where this didn’t feel anything like a Star Trek movie. There were certain scenes that felt so jarringly out of place yet perfectly in tune with the film industries affection for ‘Hollywoodizing’ their big movies. Again, I understand that Abrams and company are showing their new vision but I wish they would have trusted or cared more for the Star Trek formula. But honestly, while it’s still an issue, it didn’t seem to bother me as much during this viewing.

Another issue I still have is with the handling and redefining of some of the characters. I don’t know if it’s just an attempt to force in a fairly underwhelming romance or if it’s simply political correctness, but I wasn’t crazy about Uhuru as a bigger character while McCoy, an important character in the original series, is reserved for comic relief. Maybe it’s because the romance between Uhuru and a certain crew member feels shallow and tacked on. There’s nothing wrong with Saldana’s performance but her role is pretty flimsy. Karl Urban does some great work channelling his best DeForrest Kelley. Even though ‘Bones’ is written almost exclusively for humor, Urban is fantastic and it’s a shame he was given something meatier to work with.

My revisit also verified one thing and clarified another. Zachary Quinto as Spock is by far the best bit of casting in the movie while Chris Pine left a better impression this time around than before. Quinto nicely sells Spock through his tone, mannerisms, and pitch-perfect deliveries. Pine ends much better than he begins. In the first half of the film he’s pretty hard to digest but as his material gets better so does his performance. In fact, overall I found him to be better than I remembered. I can’t really say the same for Pegg’s Scotty or Yelchin’s Chekov, but both of their issues dealt more closely with how their characters were written.

So now the big question. Did my time away from “Star Trek” change my perception of the film? Did this fresh look at the movie provide a better experience? I would have to say yes but only slightly. “Star Trek” is still a film with a handful of flaws. At times it tries to be too hip, too cute, and too modern at the expense of those proven elements that make “Star Trek” great. On the flip side, I did find myself enjoying and embracing more of what Abrams and company were doing. This was a better experience and my anticipation for the next movie has grown. I just hope for a more focused script with less corn and a little better handling of its characters. If that happens “Star Trek Into Darkness” could be a real treat.