Your Voices is a simple concept created to encourage conversation and opinions between movie lovers. It works like this: I throw out a certain topic and I’ll take time to make my case or share my opinions. Then it’s time for Your Voices. Head to the comments section and let fellow readers and moviegoers know your thoughts on the topic for that day! 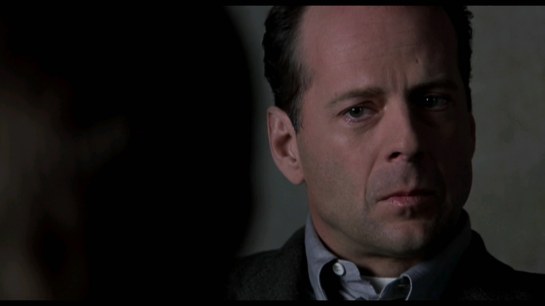 I can say without hesitation that I have always liked Bruce Willis and many of his movies hold a spot in my movie-watching heart. But the actor also hit a stage of his career where he seemed to take any small supporting part thrown his way. Lately he has shown signs of making smarter choices as evident by his work in films like “Moonrise Kingdom” and “Looper”. But for every one of those there is a G.I. Joe appearance or a downright bad movie like “The Cold Light of Day”. But still he is an actor I do enjoy even outside of his hugely successful “Die Hard” franchise.

So that got me to thinking, what is Bruce’s best movie outside of the “Die Hard” films? I’ve mentioned roles I have liked above, but there were a couple that stood out more than others. At the top of my list is “The Sixth Sense”. His turn as Dr. Malcolm Crowe still stands out as one of his best performances and one of his best movies. He drives the film with a perfectly measured performance that flows with the film’s creepy mood. It’s an easy choice for me. But what about you? Now it’s time for you to share your thoughts.

YOUR VOICES: What is your favorite non-Die Hard Bruce Willis movie?

Now it’s time for Your Voices. With so many Bruce Willis movies to consider, which one, other than the Die Hard films, would you consider his best? Please share Your Voices on today’s question. I’d love to hear from you in the comments section below.

52 thoughts on “Your Voices: On the Best Bruce Willis Movie (other than Die Hard)”