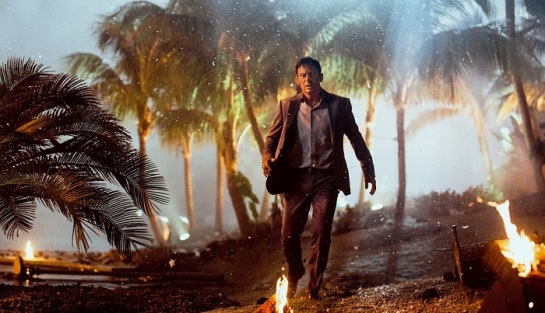 Who else thinks its a good idea to invest hundreds of millions of dollars into building a state-of-the-art theme park on an island with a dormant but historically deadly volcano? I’m guessing not many of you. But that’s exactly what happens in the upcoming Chinese disaster film “Skyfire” (a title that almost sounds like a Bond knockoff). In it a greedy American businessman played by Jason Isaacs builds his park despite the warnings of a young scientist who has been studying the volcano since it killed her mother 20 years earlier.

“Skyfire” (from English director Simon West) premiered in China in December of 2019 but now prepares for its international debut. It’s rare for movies like this to give you anything other than action, peril, and tons of CGI effects. The trailer for “Skyfire” unashamedly promise all of that and more. Honestly, I’m a bit of a sucker for that kind of thrill-a-minute over-the-top entertainment. That’s all I’m looking for with this one.

“Skyfire” releases January 12th on VOD. Check out the trailer below and let me know if you’ll be seeing it or taking a pass.