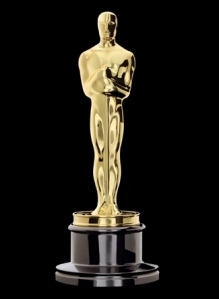 Well it has come and gone. The 2012 Oscars seemed to get here in a hurry and be done just as quick. As usual for the more recent Oscars, there were few surprises. Most of the “Big 6” went as I predicted and the only real surprises were with the technical awards. But overall it was a fun night. Here’s a few thoughts…

Billy Crystal hosted the 2012 show after the Eddie Murphy debacle (or should I say the Brett Ratner debacle) and he did a solid job. Unlike last year’s odd and sometimes uncomfortable hosting from James Franco and Anne Hathaway, this was more grounded but still quite funny. Crystal used several tried-and-true antics such as the song detailing the Best Picture Nominees and the “What they’re thinking” segment. I found them and several of Crystal’s adaptive one-liners to be very funny. Several of the presenters provided some good laughs including Will Ferrell and Zach Galifianakis, Emma Stone, Chris Rock (I was surprised, too), and of course Robert Downey, Jr. Oh, and c’mon Academy! Am I the only one who thinks that Downey, Jr. would be the funniest Oscars host of all time? Sign him up.

“Hugo” ended the night with five Oscars. It was awarded for its technical achievements and it’s hard for me to argue with that. “A Seperation” won for Best Foreign Language film which was followed by a rather unusual acceptance speech from director Asghar Farhadi. “The Descendants” won Best Adapted Screenplay and I was thrilled that “Midnight in Paris” won for Best Original Screenplay. Of course Woody Allen wasn’t there but did we ever expect him to be?

The supporting categories went exactly as expected. Octavia Spencer (The Help) and Christopher Plummer (Beginners) had already been christened the winners well before the ceremony began and that’s exactly how things played out. Spencer gave one of the most genuine and emotional acceptance speeches of the night and Plummer became the oldest Oscar winner ever. It was good seeing Nick Nolte recognized with a nomination even though I’m not sure he knew where he was last night.

Meryl Streep won Best Actress for her performance in “The Iron Lady”. That category had turned into a two person race and I really felt that Viola Davis had a good chance to win. But Streep was awarded for a performance that certainly outweighed the rather mundane and mixed reviewed movie. The Oscar media had tried their best to sell the whole Clooney (“The Descendants”) versus Pitt (“Moneyball”) Best Actor race. But as I expected (and hoped), Jean Dujardin won the Oscar for his wonderful performance in “The Artist”. Working with several more handicaps than the other nominees, Dujardin nailed his performance and deserved the award. His acceptance speech and subsequent dance showed his enthusiasm and I found myself applauding from my recliner.

The night only got better for “The Artist”. Michael Hazanavicius won the Best Director Oscar which is almost always a sign of which film will win Best Picture. Last night was no different. Hazanavicius’ gutsy project won Best Picture and I have no problem with it. While I was personally rooting for “The Tree of Life”, this was a case where the Academy got it right. “The Artist” was a nostalgic but touching film that felt plucked right out of the silent movie era. I loved seeing it win.

So while it was a fairly predictable night, it was a good night. The stars played dress-up and movie fans witnessed new films and new performances added to that Valhalla of motion picture history. I went 5 for 6 in the “Big 6” categories so that speaks to the shows lack of suspense. But there were some genuinely funny moments and some good movies received their due.

The 2012 Academy Award nominations have been announced and, just as expected, there is plenty to talk about. This year’s list features several snubs, several surprises, and several Academy misfires. But then again, isn’t that what we’ve come to expect? And isn’t that just one of the things that makes the Oscar conversation that much better? Here is the list of the nominees for “The Big 5” categories. My prediction (not my personal favorite) will be in bold print but as always, it’s subject to change. There will be a lots of interviews and promotions over the next few weeks but here is how I think things will turn out:

Actress In A Supporting Role

I know we all like mystery and surprises when it comes to Oscar night but I don’t see there being any here. Octavia Spencer has dominated this category in the pre-Oscar awards shows and I don’t see this as being any different. Of this group I would have a hard time voting against her. I felt Jessica Chastain had the best female supporting performance of the year but it wasn’t for “The Help”. Her work in “The Tree of Life” was better but her very best work was in the underappreciated film “Take Shelter”. That was the best female supporting performance. But for Oscar night, expect it to be Octavia Spencer.

Actor In A Supporting Role

I LOVED seeing Nick Nolte get a nod for his work in “Warrior”. It was my favorite male supporting performance of the year and it was the best work Nolte has done in years. Unfortunately Plummer has this category all but locked. Everything has pointed to Plummer and there is nothing about this list of nominees that would make me think otherwise. That being said, I’ll still be rooting for Nolte.

Actress In A Leading Role

This is one of the most intriguing categories of the night. Meryl Streep has gotten all of the pre-Oscar awards show buzz but don’t count out Viola Davis. Many are trying to hype up the two person race but I think for good reason. Streep may be hurt by the fact that “The Iron Lady” is a very sub par movie and while “The Help” had its flaws, it’s a better picture. My personal favorite performance of the year was from Juliette Binoche for “Certified Copy” but out of this group I would prefer Davis. But my gut tells me Streep is the favorite.

Actor In A Leading Role

Once again my personal favorite of the year is left out. I thought Michael Shannon was nothing short of brilliant for “Take Shelter” but there are some really strong performances in this group. I love seeing Bichir nominated but he has no shot. Oldman was fantastic but he has no chance. Brad Pitt gave the second best performance of his career and his second best performance of the year in “Moneyball” but he won’t win. It all comes down to Clooney and Dujardin. While Shannon was my favorite male performance of the year, Dujardin was a close second. Clooney was fantastic even though “The Descendants” wasn’t as polished as many think. Of this group I would love to see Dujardin take home the gold. But I think Clooney carried his movie and has enough charm in Hollywood to win on Oscar night.

My favorite film of 2011 was “The Tree of Life” but “The Artist” was right behind it. Michel Hazanavicius creates a gorgeous film from start to finish and I think it will win on Oscar night. But it’s not a done deal just yet. “The Descendants” is high on many lists and has a good shot at winning. While I loved many of the other movies (specifically “Midnight in Paris”, “Hugo”, “Moneyball”, and of course “The Tree of Life”), this is a two-horse race and at the end of the day I feel “The Artist” will win Best Picture and I’m fine with that.