The topic of villains has cropped up here several times over the past few weeks. In today’s Phenomenal 5 I want to look at villains but with a slight twist. Obviously the audience isn’t supposed to root for the villains when watching a film. But we all know that some movie antagonists and more evil than others. In fact, some are down right detestable. Those are ones we are exploring in this list. I’m sharing 5 phenomenal yet utterly detestable bad guys. These are the guys that you grow to dislike so much that you end up anxious for their demise – the messier the better. There are plenty to choose from so I wouldn’t say this was the definitive list. But there’s no doubt that these 5 phenomenal villains are unquestionably detestable.

Gary Oldman has a history of playing deplorable villains. But I don’t think any are as detestable as his Agent Stanfield in Luc Beeson’s “Leon: The Professional”. Stanfield is a corrupt DEA Agent who is a stylishly dressed pill-popping addict. We hate this guy immediately as we see him fly off the handle and murder an entire family including a young child. The slaughter is all over some missing cocaine that was being stashed in their apartment. The only survivor is 12-year old Mathilda (Natalie Portman) who can identify and tie Stanfield to the slaughter. Stanfield makes Mathilda and her protector, a hitman named Leon (Jean Reno) his prime target. Stanfield is a slimy and despicable villain who is willing to waste anyone that inconveniences him, even children. How can he not be on this list?

My wife still says she has a hard time liking Kevin Bacon due to his performance as reform school guard Sean Nokes in 1996’s “Sleepers”. I can’t say I blame her. A group of mischievous boys from Hell’s Kitchen end up being sent to Wilkinson Home for Boys after their antics finally catch up to them. But one of the heads of the school is a disgustingly vile guard who uses his authority and power to abuse the boys in every way possible. He verbally abuses them. He beats them. He and his guard buddies even sexually assault them. It’s a strong but disturbing and uncomfortable performance from Bacon which is one reason this character is perfect for this list. The movie leaps ahead 14 years later where two of the boys run into Nokes. They reintroduce themselves to him and lets just say that the results are certainly satisfying. 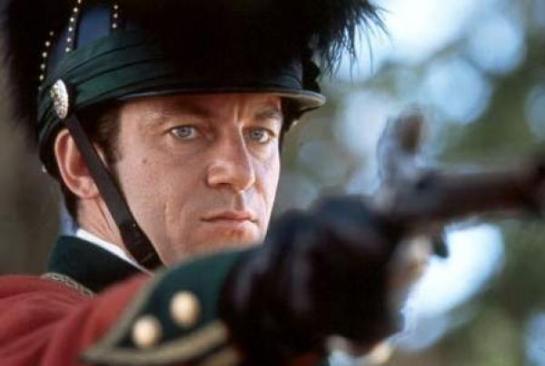 In “The Patriot” Mel Gibson plays a respected man who due to past experiences is reluctant to support the colonies decision to go to war with England. But his perspective changes when he encounters Colonel Tavington (Jason Isaacs), a vicious and ruthless English officer whose known as “The Butcher” by his fellow Englishman. Isaacs’ arrogance and calloused view of human life is never more evident than in the scene where he takes the life of Gibson’s son followed by the comment “Stupid boy”. Also locking an entire village in a church and flippantly burning them alive does nothing to endear Tavington to us. And then there’s his showdown with Heath Ledger’s character, Gibson’s oldest son. Tavington is about as detestable as a villain can be and when he meets up with Mel Gibson on the battlefield we are ready for him to get whats coming to him.

Writer and director Guillermo del Toro created a dark but fantastical world in his 2006 fantasy film Pan’s Labyrinth. In the film, young Ofelia and her pregnant mother come to live with her new stepfather Vidal. He’s a military officer stationed in the mountains of Spain and tasked with squelching a rebel movement against his cause. We quickly learn that Vidal is not only a brutal military man but also extremely hateful and eventually abusive towards Ofelia and her mother. Vidal is one of those characters that is so cruel and so evil that he makes your skin crawl. This violent sociopath soon completely loses touch with reality and the pure evil in his heart is realized. It all leads to a heart-breaking final scene with Ofelia face-to-face with an unbridled Vidal who ends up solidifying his spot on this list.

One of the things that makes Ralph Fiennes’ Amon Goth from “Schindler’s List” so terrifying and detestable is the fact that he is based on a real person. This Nazi SS officer oversaw the slaughter of thousands of Jews in his brutal death camps. Fiennes gives a tremendous performance bringing this vile and psychopathic mass murderer to life on screen. We see him issue orders that results in the deaths of so many. He personally shoots men and women in the head in order to make examples out of them. He even sits on the terrace of his hilltop home overlooking the camp and shoots random prisoners with his high-powered sniper rifle for no real purpose other than his sadistic hatred. We’ve seen lots of Nazis in cinema history but none are as unnerving and deplorable as to murderous savage Amon Goth.

And there they are, 5 phenomenal villains that we can all agree are detestable. See someone I missed? Please take time to let me know who you would have included on this list.