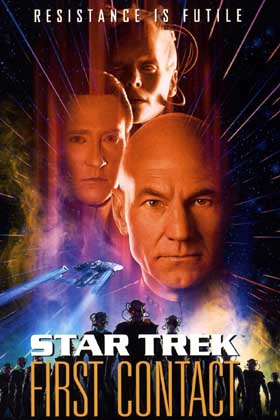 Star Trek is all the buzz right now and with the newest film about to hit U.S. theaters, I thought it would be fun to talk about one of my favorite Star Trek movies. For clarity, I wasn’t a huge fan of the original series. It wasn’t until “The Next Generation” that I became really interested in the Star Trek universe. The TNG cast would appear in four feature films that connected to their 7 season series. I think the best of those movies was “Star Trek: First Contact”. Even more, I think a good case could be made that it’s the best Star Trek movie period. We’ll save that debate for another time.

“First Contact” is directly connected to a popular storyline from the television series and it doesn’t take long to see that. I’m not going to say you would be totally lost unless you’re familiar with the story, but it certainly adds a lot to the movie if you know the story it’s tied into. The film begins with Captain Jean-Luc Picard (Patrick Stewart) dreaming about his past experience with the mysterious and menacing Borg. The Borg are a group of cybernetic organisms made up of various species who have been “assimilated” into their collective. The Borg capture and brutally assimilate others through a painful implant procedure which eventually connects them to the one domineering “hive mind”. The Borg themselves are half-living / half-machine drones and the collective’s ultimate goal is perfection as they see it.

Picard is jarred from his troubling dream to find out that a lone Borg cube has launched an attack on Earth. It’s funny how out-of-the-blue this occurs in the film with seemingly no buildup whatsoever. The film expects the audience to hop onboard and go with it. Picard is ready to enter the fight but he and his Enterprise crew are ordered to stay away in fear that Picard’s past assimilation by the Borg could become a liability. Picard disobeys orders and enters the fray where he learns that the Borg plan to travel back in time to prevent what’s known on Earth as the day of First Contact. It’s when a lushy visionary named Zefram Cochrane (James Cromwell) introduces warp travel which leads to our first contact with alien life. By keeping this from happening, the Borg will keep their biggest threat, the Federation, from interfering with their plans.

The Enterprise follows the Borg back in time where the movie splinters into two storylines. An away team is sent down to Earth to ensure Cochrane follows through with his test flight while others stay aboard the Enterprise to fight off the Borg who are attempting to take the ship. Jonathan Frakes, who also plays first officer Will Riker, handles the directing after big names like Ridley Scott and John McTiernan turned the movie down. This turned out to be a good decision. Frakes’ knowledge of the material after years on the TV series pays off.

Frakes weaves the stories together nicely and he’s able to keep the vital Star Trek tone and feel even though the movie features a much bigger budget and heavier dose of special effects. This is something the newer Star Trek reboot, a film I’ve grown to have some appreciation for, was never able to do. Writers Ronald Moore and Brannon Braga deserve a lot of credit for that as well. The two begin the first draft of the script shortly after the release of “Star Trek: Generations”, a film they also wrote. Their familiarity with the characters and the history of the franchise is certainly realized on screen. The story is smart and carries with it the typical Star Trek tendencies of dialogue over action although we do get more action than we’re used to seeing.

The cast is another reason the movie works so well. The main cast has already put so much of themselves into these characters that they know them by heart. Patrick Stewart is still the best Star Trek captain in my book. He’s rock solid yet again as Captain Picard. It’s also great to see Frakes, Brent Spiner, Michael Dorn, Gates McFadden, LeVar Burton, and Marina Sirtis reprising their roles as Picard’s crew. I also enjoyed Cromwell’s performance which is sometimes a bit hokey but still entertaining. It’s said Tom Hanks was offered the role but turned it down due to scheduling conflicts. And I have to mention Alice Krige as the disturbing yet seductive Borg Queen. Not only does the character offer some of the film’s slicker visual moments but she gives us a Star Trek villain unlike any we’ve seen.

One complaint than could be hurled at “Star Trek: First Contact” is that even with its bigger budget it sometimes feels like a longer television episode. That’s not a big deal with me because there are a couple of beautifully done effects sequences that clearly make the movie stand out, but there are many other moments that give the argument some validity. There are also a few questions that are never addressed at all. For example Geordi La Forge (Burton) no longer has his air filter visor. Now he has some type of ocular implants but its never even hinted at. And as I mentioned earlier, the film offers no real setup to the Borg attack at all.

These issues may have bothered some more than they did me because they never seriously hindered my enjoyment of the film. This is the first Star Trek movie to feature the TNG cast exclusively and the result was fantastic. Those looking for a standard Hollywood sci-fi flick may not leave “First Contact” completely satisfied. But Star Trek fans will find that same style and unique form of storytelling that they’ve come to expect from the franchise. Personally, I love it.