Michael Mann is a director that usually catches my attention. The 71-year old Mann has made several films over the years that I deeply love – movies like “The Last of the Mohicans” and “Heat”. It’s my strong affection for his good films that enables me to overlook his bad ones like “Miami Vice” and “The Keep”. The big question for me is which kind of movie is “Blackhat”? Does Mann give us another signature rock-solid thriller, or does this film qualify as a disappointing clunker?

So far it hasn’t been a good ride for “Blackhat”. Very few critics have given the film high marks and it’s already been considered a box office bomb. Unfortunately the criticisms have merit and it doesn’t take long to understand why the film was dumped in the January movie release graveyard. The most disappointing thing is that the film has a very timely and relevant concept. But that concept drowns in vast chasms of monotony and lethargy.

Chris Hemsworth steps back from his popular Marvel superhero persona to play an incarcerated computer hacker named Nick Hathaway. After a cyberterrorist triggers an explosion at a Chinese nuclear power plant, Hathaway agrees to help the FBI and the Chinese government catch the perpetrator in exchange for having his sentence commuted. After about two lines of political wrangling and negotiations Nick is out of jail and the internet manhunt begins.

Hathaway (who looks like he’s been at a GQ photo shoot instead of a penitentiary) is joined by an old friend and Chinese cyber officer named Chen Dawai (Leehom Wang), FBI Agent Carol Barrett (Viola Davis), and Dawai’s sister Lien (Tang Wei) who out of the blue becomes Hathaway’s lover. The group tracks their target from the United States to China to Malaysia. Mann knows how to shoot locations and some of the film’s best moments involve his camera sweeping over a landscape or tracking down tight alleys. It’s certainly a better alternative than the constant shots of people staring at computer screens.

Speaking of that, we get plenty of scrolling digits and keyboard tapping. Computers obviously play a key role in the story, but it seems like we spend an eternity logging in, logging out, typing in the code, and so on and so on. I’m sure a lot of it is realistic. In fact Wired magazine reported that hackers and security experts both commended the movie for its accurate portrayals. But honestly, after a while I didn’t care. There was just too much of it for me and sometimes it would grind the movie to a halt. 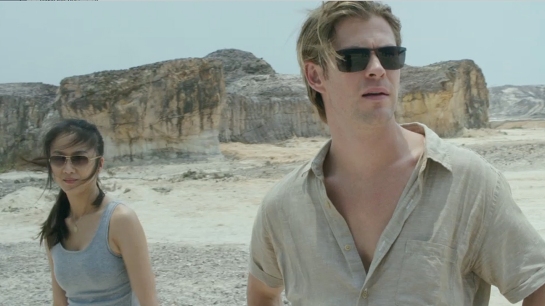 No such thing could be said about the action. Mann has always had an incredible eye for action sequences and it is no different here. And at times the action scenes actually jolted me back into the movie. Mann’s camera movements, his strategic angles, his intense use of sound and of his surroundings – all of these create some truly spectacular action scenes. Without question, the action is the star of the movie and I wish we had gotten more of it and less of the plodding story.

“Blackhat” is a movie built around a good idea and strengthened by some fantastic pulse-pounding action. But ultimately it sinks due to its tiresome, long-winded story. Even the ever likable Chris Hemsworth can’t help it. He seems completely out of character, struggling with whatever kind of weird accent he’s going for, and I never felt a charismatic spark from him. His performance will undoubtedly have people questioning his abilities in roles outside of the superhero genre. I don’t know, chances are he was simply bored like I was through a lot of this movie.

The Keith & the Movies Valhalla is a place of tribute for those movies that I hold in the highest regard. These are films that embody everything that is great about motion pictures. These are the best of the best – movies that I truly love and that stand above the rest. There are many great movies that won’t find their way into these sacred halls. But here you will find those films that I believe personify brilliance in filmmaking, storytelling, and entertainment. These glorious 5 star accomplishments are worthy of special recognition as the very best. Ok, enough of the high drama! In other words, these are my favorite movies of all time, ok?

There are a number of movies that have left indelible marks on me. In many instances I still remember the experience I had when I first saw them. Such is the case with Michael Mann’s “The Last of the Mohicans”. This version of James Fenimore Cooper’s classic novel blew me away during its initial theatrical release in 1992 and has held a special place with me since. Personally it’s a near flawless film teeming with gorgeous cinematography, fantastic action, and a strong measured romance set during a perfectly realized 1757 American frontier.

The film is also helped by some top notch acting especially from Daniel Day-Lewis as well as what may be my favorite movie score to ever grace a motion picture. The music from Trevor Jones is both beautiful and appropriate and it even found its way into my wedding. Some have downplayed “The Last of the Mohicans” choosing to dismiss it as “history lite”. Personally I adore the film for its rich cinematic story all the way to its great production. For me its place in the Valhalla was cemented from the start.

“The Last of the Mohicans” is the seventh inductee into the Keith & the Movies Valhalla. But there are more amazing movies to come in the near future so stay tuned. What are your thoughts on this Michael Mann new classic? Is it worth my high praise or is it an overrated picture? What about the performance of Daniel Day-Lewis? You now know my opinion. I’d love to hear yours. Please take time to share your comments below.

James Fenimore Cooper’s novel “The Last of the Mohicans” was first adapted for the big screen in 1912. Other versions of the story appeared at theaters in 1936 and 1963. But then in 1992 Michael Mann delivered not only the best version of the classic story but also one of the most well-crafted and cinematic period piece films you’ll find. Mann gives us a gritty frontier action picture placed in a beautiful yet worn-torn setting. But an equally strong component of the film is the passionate love story interwoven throughout the picture. It’s a romance that never feels tacked on or disingenuous. In fact, it fuels much of what drives the narrative all the way to its powerful final 10 minutes.

The film stars Daniel Day-Lewis as Nathaniel Hawkeye, adopted white son of Chingachgook (Russell Means). Joined by Uncas (Eric Schweig), Chingachgook’s only blood son, the three find themselves involved in The French and Indian War that they are desperately trying to avoid. After tracking a Huron war party the three rescue Cora (Madeleine Stowe) and Alice (Joghi May) Munro, daughters of a British Colonel stationed at Fort William Henry. Realizing more Hurons will be coming, they agree to lead the daughters and Major Duncan Heyward (Steven Waddington) to the fort. From there relationships develop, jealousy and deception is revealed, and the horrors of a new kind of war take center stage.

The casting is proven good by some truly wonderful performances throughout the movie. Lewis is fantastic as Nathaniel and his onscreen chemistry with Stowe is quite good. Their romance feels genuine even though it feels a little hurried. Lewis is also good in the action sequences as is Schweig and Means. The action is beautifully shot and choreographed and the three actors have absolutely no trouble selling it. Also fun to watch is the great Wes Studi as Magua, a twisted Huron warrior who wants to kill as many “grey hairs” as possible. Everyone is good in the film and even the smaller performances ting with authenticity.

This film version isn’t ardently faithful to Cooper’s novel but in many ways it’s an improvement on it. Mann and co-writer Christopher Crowe put together an energetic and fast-paced adaptation. It ruggedly portrays the demanding and taxing frontier life and sharply contrasts that with the aristocratic, prim and proper attitudes of the English and French. It’s that monarchist arrogance and sense of entitlement that meets the sharp and violent reality of the frontier. It also doesn’t shy away from giving the action a gritty and sometimes bloody presentation. But with the exception of one particular scene, the violence never feels gratuitous. Instead it feels like an accurate representation of what that crude and sometimes brutal combat would be like.

I also have to mention how wonderful the movie looks. I mentioned how beautifully shot the action sequences are but the same could be said for the entire picture. Filmed in North Carolina’s Blue Ridge Mountains, the movie features so many scenes of natural beauty that it’s impossible not to be drawn in. The gorgeous locations mixed with Dante Spinotti’s stunning cinematography gives the setting an uncharted and untouched look. And it’s impossible not to be impressed by his clever camera angles and perfectly executed long shots that give so many scenes an undeniable cinematic flare.

And speaking of presentation, I have to mention the incredible score by Trevor Jones and Randy Edelman. Of all of the movie scores I have heard, and there are plenty of great ones out there, none has added as much to a film or effected me more that Jones’ and Edelman’s work here. From the percussion-driven music during the battle at Fort William Henry to the emotional period string arrangement playing during the finale, every note hits perfectly. But most importantly, the score adds to the mood and tone of almost every scene.

Michael Mann’s “The Last of the Mohicans” is an example of wonderful filmmaking from title to credits. Some may not respond as strongly to its straightforward storytelling or its occasionally intense violence. But I love it’s fast and fluid pacing, realistic frontier depiction, and heartfelt romance. The performances are great throughout led by more strong work Daniel Day-Lewis. It’s also a technical achievement featuring stunning visuals, remarkable sound, and a soundtrack that still moves me to this day. This is a unique historical period film that has a feel all its own. It won me over when I first saw it in the theater in 1992 and it’s one of the few movies that I can watch again today anytime or anywhere.