The entire Expendables franchise started as a nostalgic rekindling of the once prominent over-the-top action genre. It wasn’t afraid to parody itself or play with the familiar action cliches of the 1980s and early 90s. And half of the fun was just seeing these actors together hamming it up and shooting a ton of bullets. The first film was entertaining and it set the table for the second installment which I thought was funnier and more self-deprecating while clinging to the all-important nostalgia. Now we have an inevitable third film which tries to keep the ball rolling.

“The Expendables 3” is made for a PG-13 audience (at least so it says), but don’t be misled. The body count is still astronomical and bullets fly aplenty. But the blood is reined in just enough to somehow keep it from an R rating. Unfortunately its desire for a broader audience, while noble in purpose, is undermined by the fact that the movie simply isn’t as fun or nostalgic as either of the first two pictures. 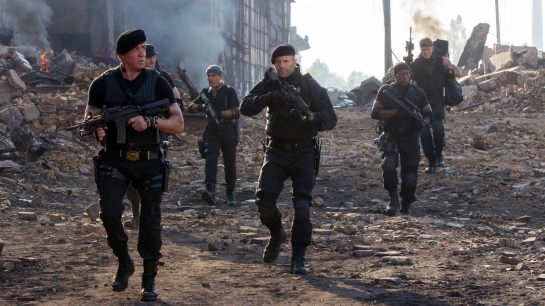 Sylvester Stallone and his action ensemble returns minus Bruce Willis who declined because he wanted more money (one of the film’s funnier jokes takes a shot at the publicized dispute). And in keeping with the franchise’s trend, several new stars are added into the mix. Wesley Snipes, Antonio Banderas, Harrison Ford, Mel Gibson, and action star extraordinaire (sarcasm absolutely intended) Kelsey Grammer. These are some interesting names and it would be fun to see what the movie would be like if they were all that was added to it.

But in an attempt to inject some youth and potentially pass the torch, a group of new Expendables are added to the group. This is one of the film’s major blunders because none of these youngsters are the slightest bit interesting. They are cardboard cutouts and sometimes their acting makes Stallone’s look good. In case you don’t know, that is no compliment. They are walking talking cliches and they zap the movie of its fun and playful energy.

But the film’s main dish is the action and as I mentioned there is plenty of it. The problem is it lacks the pop that we’ve seen in the other flicks. What I mean is the action scenes rarely energize the movie. In the earlier films regardless of whatever narrative problems they would be having you could count on the action to liven things up. Here it often feels generic and monotonous. There are moments when they do pull off one of those great over-the-top stunts that feels right at home in the 80s. There are other moments that just feel like a boring grind. 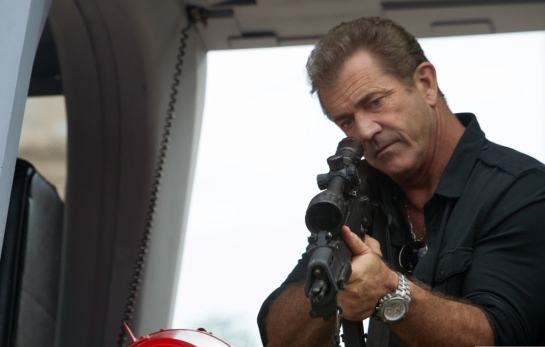 Thankfully some of the old action veterans do save this from being a disaster. Mel Gibson is deliciously maniacal as the head baddie. While his grand scheme and ultimate motivations are murky, Gibson has a ball with the character and I loved every minute he was on screen. Harrison Ford was also a hoot as a grumpy hard-nosed CIA officer. Arnold Schwarzenegger is also fun and every line he has seems to be poking fun at himself. Same with Wesley Snipes. But many of the cast gets lost in the shuffle and rarely get their signature moment in the film. Too many characters and not enough screen time to go around.

In the end “The Expendables 3” lacks the fun, the excitement, and the charm that the franchise built itself on. The action isn’t good enough this time around to save the film from its clunky and paper-thin plot. And while some of the old guys are a lot of fun, namely Gibson and Ford, too many characters are shortchanged thanks to the introduction of an insipid younger crew. It’s unfortunate because I have always enjoyed these movies as entertaining nostalgic escapes. “The Expendables 3” has left me wondering if this ship has run its course.