I’m no card carrying Ben Stiller fan but I was really interested to see his vision of “Walter Mitty”. This is the second film based on the 1939 James Thurber short story and some doubted it would ever see the light of day. Various versions of the script were tossed around and actors such as Jim Carrey, Owen Wilson, and Sacha Baron Cohen were all in line to play the lead role. But after years in development limbo, it was Stiller who was signed to not only star in but direct Steve Conrad’s final script.

Stiller and Conrad use Thurber’s vision of Walter Mitty as a reserved average Joe who experiences the life he wants within his vivid world of daydreams. But the movie ends up pushing that aside and goes off on its own, becoming a film about fulfillment and self-discovery realized through a pretty remarkable journey. I was fine with that as long as it served the picture well. There are moments of greatness in “The Secret Life of Walter Mitty” and there are scenes that really drew me in. But there was also something missing – something that holds the film back and keeps it from being the great movie we are often teased with.

In this modern telling, Walter Mitty (Stiller) works in the ‘photo negative assets’ department of Life magazine. One morning the employees get news that the publication will be turned into an online-only magazine making many of their jobs “nonessential”. Acclaimed photojournalist Sean O’Connell (Sean Penn) sends the magazine a negative that he believes to be perfect for Life magazine’s final cover. But Walter misplaces the negative. So with his job on the line and the pompous transition supervisor (Adam Scott) breathing down his neck, Walter sets out on a globe-trotting adventure to find O’Connell and hopefully the negative.

Walter’s journey takes him to some gorgeous locations including Greenland, Iceland, and The Himalayans. Stiller and cinematographer Stuart Dryburgh draw us into these places sometimes with breathtaking perspective. They invigorate Walter’s journey and in some ways substantiate his personal transformation. But I also struggled with certain aspects of his adventure. There are so many obvious questions that the film prefers you not ask. And there are also an insane amount of conveniences that aid Walter’s quest. Regardless of the situation there is almost always a perfect out for him. Perhaps there is a deeper meaning to it but it isn’t hinted at from the story.

“Walter Mitty” also seems to have a small identity crisis. There are some pretty funny bits early in the film but then there is a long stretch where it takes things pretty seriously. The humor is back-burnered and it becomes a casually paced drama with a fair share of high points and lulls. It lacks a consistency that great films have but it also had an unexplainable attraction that I never could shake. 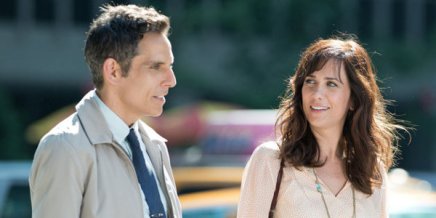 As for Stiller’s work in front of the camera, I was really impressed. In a year featuring a number of towering performances, I wouldn’t call Stiller’s the best. But there is a legitimate sympathetic charm to what he brings to the Walter Mitty character. I was really drawn to him and personally sympathized with his perception of himself and his inadequacies. Stiller magically captures all of that. He does lose some of his attraction as his character changes towards the end but I still love this performance. I also thought Kristen Wiig was good but underwritten as the proverbial ‘girl of Walter’s dreams’ and Shirley MacClaine is good in a smaller role. Adam Scott is harder to gauge. His performance isn’t that bad but the writing makes this typical corporate bad guy a little too on the nose.

“The Secret Life of Walter Mitty” is a tough movie to score. It certainly gets points for its visual style and gorgeous locales. It also gets points for Stiller’s fine performance and the sweet infectious charm of his character. Unfortunately it is an uneven film with a few too many contrivances and the occasional lulls. But yet there is something about the movie that I can’t dismiss. It has stuck with me and left the impression that I really need to see it again. That’s usually a sign that a movie works, at least on some levels.

38 thoughts on “REVIEW: “The Secret Life of Walter Mitty””