No one can deny Guillermo del Toro’s willingness to utilize every trick in the cinematic playbook to create a magnificent visual experience. He has built worlds through several genres including dark fantasy, gothic horror, superhero, and even creature features. Yet despite his keen eye, vivid imagination, and a consistent backing from critics, “Pan’s Labyrinth” is his only film I would call truly great. 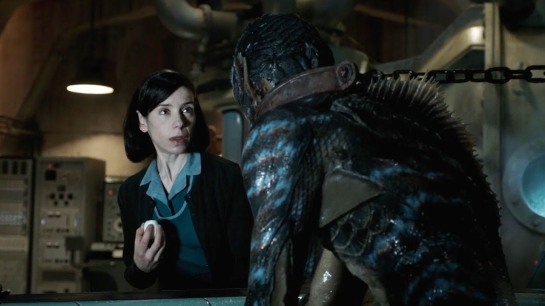 “The Shape of Water” could be called many things – an offbeat fairytale, a political fable, an unconventional love story, an allegory for del Toro’s view of the world today. All of those descriptions fit to some degree or another, and del Toro plays with them with varying levels of success.

Del Toro’s story, with its pulsating Cold War vibe, takes place in 1962 Baltimore. The wondrously expressive Sally Hawkins plays Elisa, mute since birth, who lives in an apartment above an old movie house. She and her next door neighbor Giles (Richard Jenkins) spend their time together watching old musicals and sharing their struggles. Both fit into one of del Toro’s more obvious themes – the plight of the marginalized.

Elisa works the night shift as a janitor at a secret government facility along with her close friend Zelda (a very good Octavia Spencer) who also fits within the marginalized theme. The facility has just acquired an “asset” pulled from a South American river – a tall, gilled amphibian-man accompanied by Colonel Richard Strickland (Michael Shannon). He is there to oversee the study of the creature and he’s clearly the film’s chief antagonist. Shannon is great and it’s a role he could probably do in his sleep. And as you would expect he is completely committed.

But while undeniably menacing, Shannon (of no fault of his own) is also terribly on the nose. Much of del Toro’s more cynical point of view is encapsulated in Shannon’s character. He’s written to fit the mean old-fashioned Red State stereotype and through him del Toro gets to comment on religion, race and a host of other topics. But there is no subtlety whatsoever. You can practically hear del Toro beating his pulpit through much of Shannon’s dialogue.

Elisa’s curiosity and empathy help her to form a bond with the creature (yet another among the marginalized). She sneaks in the labratory and shares her lunch with the creature and plays it music on a portable record player. How is she able to have so much unguarded access to what is called “the most sensitive asset to ever be housed in the facility” and something we find out the Russians are after? There’s not a good answer to that, but they form a bond nonetheless. And after Elisa overhears talk of dissection, she knows she needs to bust the creature out.

As you watch you can’t help but see allusions to “The Creature From the Black Lagoon”, “King Kong” and even “Beauty and the Beast”. But del Toro pushes his creature fantasy further than any of those pictures. For some the film is genuinely romantic but I never had that sensation. The pacing doesn’t give the relationship time to germinate. And there are other things that get in the way – del Toro’s weird use of sexuality; a brief but bizarre dance number (I’ll leave it at that); and one scene which some have called the most beautiful moment in the film yet I couldn’t get over the sheer absurdity of how it played out. For me all of this underserved the romance the movie is trying to establish.

While it has it’s narrative imperfections you can’t help but love the world del Toro visualizes. Inside the laboratory has a cold, harsh, metallic look. But outside the film takes on a gorgeous glow. Many images stand out for their beauty. It may be a bead of water dancing down a bus window or a brief camera pan across a movie house marquee right after a rain. The creature itself (played by long-time del Toro collaborator Doug Jones) is a fantastic creation made from traditional effects over CGI. Then you have Alexandre Desplat’s lovely, waltzy, heart-warming score which may be the best of the year. And of course the performances which are top-to-bottom fabulous.

It’s tough to know where to land on “The Shape of Water”. On one side you have a world so beautifully visualized, an enchanting classic movie vibe, top-notch performances, and a score that swept me away. On the other hand you have some glaring storytelling issues – an underserved romance, heavy-handed messaging that spells out instead of engaging, peculiar injections of nudity and graphic violence (sorry kids), and key scenes undercut by their goofiness. Yes, I know this is a fantasy picture and maybe I should be more imaginative, but when I’m thinking about these things as the movie plays – that’s a bummer. But did I mention how pretty the world is?