It was 32 years ago that childhood friends Sam Raimi and Bruce Campbell introduced a small, low budget horror film that would influence the genre for decades and become one of the biggest cult classics in film history. That movie was “The Evil Dead”. With little money and a cast and crew made up mostly of family and friends, Raimi and Campbell still managed to craft a visceral, gory, and frightening gem that remains one of my very favorite horror pictures of all time.

In keeping with Hollywood’s current remake fetish and creative brain freeze it seems only logical that we would get “Evil Dead”, an update on the 1981 classic. When I first heard about this project red flags went up everywhere. How dare they mess which such a cult favorite and one that I personally hold as sacred. I was instantly skeptical and uninterested. That was until I heard some very interesting details. Sam Raimi and Bruce Campbell would be producing the movie. Game on! From that moment on I’ve been anxious to see this film. My anticipation grew after seeing the first trailer and after hearing Campbell and Raimi’s enthusiasm. But I still had a deep burning question – could they even come close to capturing what made the original so great?

They certainly weren’t afraid to set the bar high. The movie poster features the line “The most terrifying film you will ever experience”. While I wouldn’t go that far, “Evil Dead” is still a creepy, gore-soaked, step back in time that’s sure to entertain old-school horror fans and shock newer viewers who are more accustomed to the popular PG-13 ghost stories of today. Raimi and Campbell hand over the directing keys to Fede Alvarez but their bloody fingerprints are all over this picture. And while there are question marks and a few plot holes, I still found this to be satisfying horror ride and a perfectly acceptable reimagining. 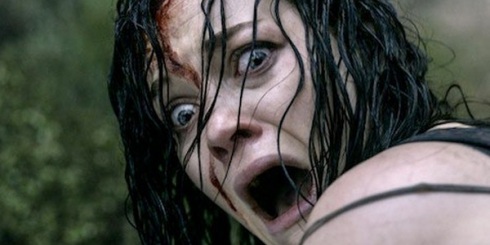 There are several noticeable story changes in this film. Instead of it being five friends taking a fun filled vacation in the Tennessee hills, these five folks come together for a much more serious purpose. Mia (Jane Levy) has struggled with a drug problem and after a serious overdose her friends Olivia (Jessica Lewis) and Eric (Lou Taylor Pucci) decide to take her away to her family’s remote rundown cabin to help her quit cold turkey. Mia’s brother David (Shiloh Fernandez) and his girlfriend Natalie (Elizabeth Blackmore) meet them there to help. After making a grisly discovery in the basement, the group uncover a book bound in human skin and filled with disturbing text and images.

Now fans of the original know this is the Necronomicon (The Book of the Dead) and that by quoting a specific set of words from the book, you would awaken an evil presence in the woods. Well that’s what happens and quite literally all Hell breaks loose. One demon possession later and the creepiness shoots through the roof and the blood starts to flow. Now you should know this going in but in case you don’t let me emphasize that this is an extremely graphic film. A crowbar, an electric knife, a machete, a box cutter – these are just some of the instruments of defense of death and this film isn’t shy about using them.

The spectacular special effects only makes the eeriness more pronounced and the gore more vivid. This is worth mentioning because Alvarez was emphatic that no CGI be used. What you see is the real deal – old school visual effects with some clever illusions and slick camera tricks. I loved this decision. It’s a clear reminder that great effects can be done without the cheaper and often times more obvious CGI. The visuals work hand-in-hand with the brilliant use of sound. Every creak from the cabin, every flick of a switch, and every chord from the score help in giving the movie an eerie and intense feel. This is a very technically impressive film and I can just see Raimi wanting to play with all the visual toys that weren’t available to him in 1981. 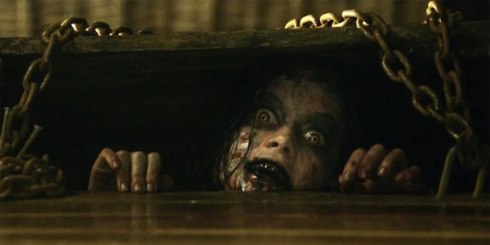 Now perhaps the biggest question that will be asked by many centers around the horror. Is “Evil Dead” scary? This is almost impossible for me to gauge because movies never really scare me. For me effective horror pictures are one the creep me out, not necessarily scare me. While not on the same level as its inspiration, this film definitely has its creepy and disturbing moments. But it certainly scared some people during my screening so if that’s what your looking for, you should find it here.

But you won’t find the same sly and subtle humor that’s in the original. Everything here is dead serious (pun intended) and I honestly missed those lighter moments. There were also a few minor things that didn’t quite work as the movie intended. There’s an opening scene showing a disturbing past event that had happened in the cabin’s basement. The trouble is the entire scene felt completely disconnected from the rest of the movie. I had so many unanswered questions about it and I just don’t understand why it’s there. Then there is a scene close to the big finale featuring a bit of creative (and utterly preposterous) engineering. I’m not going to give anything away but it and its subsequent scene was just too ridiculous to buy into. Thankfully the movie doesn’t waste any time moving past it and making its way to its entertaining, blood-soaked ending. It too is different from the original but it worked for me.

Even though this is a remake of a true classic horror picture, for me it was important to not judge this movie strictly by the 1981 film or to go to far in comparing them. This movie stands on its own and it does it well. But it never forgets its roots and that’s the main reason I found it to be a success. It follows the pattern set forth by the earlier film and then amps things up 110%. It’s gruesome, it’s gory, it’s relentless, and it all fits perfectly with the films frightening tone. Fans of the classic will love the various tips of the hat to the original and new fans will be rocked by their visceral dose of old-school horror. I see it appealing to both groups. “Evil Dead” worked for me not only as a solid modern-day remake but as one of the better horror pictures to come around in years. It looks like Raimi and Campbell’s tried and true formula still works today.