It will be a light week here at Keith & the Movies as I am heading out on vacation with my family. We are keeping it in the States this year and heading to the Great Smoky Mountains. But I can’t leave without dropping a new Phenomenal 5 on you. In light of our travels today I’m going to look at movie vacations but with a darker twist. These five experiences of troubled travelers certainly started with happier intentions but things go terribly wrong. Now throughout film history there have been many movie vacations that have went south so I’m not going to call this the definitive list. But there’s no doubting that these five movie vacations go phenomenally bad.

I may be wrong but I don’t think many people include demon possession, dismemberment, and death in their vacation itinerary. Neither did our five college kids in Sam Raimi’s “The Evil Dead” but that’s exactly what they got. Ash (Bruce Campbell) and company plan on spending their Spring vacation in a small remote mountain cabin but their fun and relaxation is thrown aside after they unleash demonic forces via The Book of the Dead. Things couldn’t possibly go any worse for these friends as one after another meet their grisly end. For me this is a horror movie classic that still creeps me out even though it can seem a little dated. But if there’s one thing I have learned from “The Evil Dead” it’s that if I ever find an old book bound in human flesh while I’m on vacation, I’m leaving it alone!

I don’t often use movies this recent on my Phenomenal 5 lists but this one fit perfectly. Based on the true story of a family’s remarkable survival during the deadly Indian Ocean tsunami of 2004, “The Impossible” captures the pain and raw emotion that such a devastating tragedy must bring. Many have harshly judged the film for downplaying the suffering of the locals and for using white actors to tell the story. I don’t buy into either of those criticisms. I think the film is respectful and powerful except when it gets a little too big at the end. This is a much more serious example of a family vacation that goes terribly bad but it’s one that deserves a spot on this list. Despite the popular criticisms, I found this to be a testament of the human spirit and of the bond of family.

#3 – “AN AMERICAN WEREWOLF IN LONDON”

I’m sure that college vacationers David Kessler and Jack Goodman had several concerns going into their backpacking trip across England’s North York Moors. I’m sure they weighed everything from sprained ankles to bad weather. But I wonder if they ever factored in a werewolf attack? That’s exactly what happens in this 1981 horror/comedy classic and lets just say the results dance between really funny and really gruesome. Visions of dead friends, graphic transformations, and a big finale in downtown London are things that certainly weren’t part of the vacation planning. But they are great moments for anyone who has seen this film. When it comes to movie vacations gone wrong, it’s hard to leave this one off the list.

All vacations start off as well intentioned getaways. Some are for spending times with family. Others are for seeing new parts of the world. In “The Descent”, six young women go on a group vacation intended to not only serve as a getaway but also to bring these friends back together after a deadly tragedy. The ladies go spelunking in an uncharted cave and lets just say its a really bad decision. It’s bad enough that the caverns cave in and trap them. That alone is enough to make this list. But throw in carnivorous subterranean creatures and now you understand why it’s #2. Things go really bad here in this survival horror picture that I really appreciate. It’s unique in several ways and its a perfect fit for any bad vacations list. 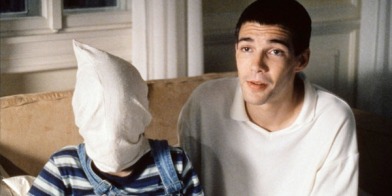 “Funny Games” isn’t what I would call a horror picture but it is one of the most frightening and unsettling films you’ll see. It’s also a perfect example of a movie vacation that goes terribly wrong. Michael Haneke, a filmmaker I’ve grown to love, wrote and directed this discomforting story of a German family spending some vacation time at their Austrian lake house. The husband and wife, their young son, and the family dog have their plans turned upside down when two young men appear and take them hostage in their house. They terrorize and psychologically torture the family and Haneke sits us down and makes us watch it all. It’s brutally realistic and genuinely disturbing which is what really sets this film apart. It’s a hard film to watch but it shows Haneke’s great eye for filmmaking.

There they are – five movie vacations that I hope to NEVER experience. What do you think? There are SO many more that come to mind. Please take time to share your thoughts.