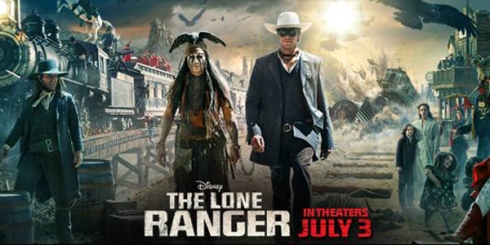 “Pirates of the Caribbean” set in the old west. It’s an unavoidable comparison. It’s also a very accurate description of Gore Verbinski and Jerry Bruckheimer’s “The Lone Ranger”. Johnny Depp again takes center stage and is the ringleader of this wacky and sometimes absurd action adventure. The ingredients are all here. A charismatic and eccentric lead, a fun and action-packed story model, and a filmmaking team who has experienced success before. Maybe that’s why the end result is so disappointing.

As a kid I loved the old television reruns of The Lone Ranger starring Clayton Moore and Jay Silverheels. Well let me say that it didn’t take long for me to see the mammoth sized differences between this film and the great original material. I mean to call this film a reimagining would be a gross understatement. There is almost no similarity between these film and the classic story other than the name and some of the basic cosmetics. There is the white hat and white horse. There are silver bullets and the black masks. There are also a few familiar names and familiar plot points. But you’ll be hard pressed to find many other resemblances. Who knows, maybe that’s where the first of the film’s many missteps begins.

Now I wasn’t expecting this to be an ultra-serious tribute to this classic character. Again this is from the makers of “Pirates of the Caribbean”. But I also didn’t expect it to be so drastically different and so blasted silly. It starts with the Lone Ranger character himself. Armie Hammer seems completely lost at times playing a character who is a bumbling oaf from the first time we see him until the final credits. The character has good intentions but he’s a far cry from the heroic masked administrator of justice I was hoping for. Hammer’s performance doesn’t help. He struggles through a ridiculous and sometimes numbingly lame script that drags him through a plethora of slapstick and oddball humor that admittedly works on occasions. But more often than not it lands with a thud and Hammer just can’t sell it.

The nuttiness isn’t just confined to Hammer and the lead character. Johnny Depp’s Tonto is in many ways a Native American Jack Sparrow. He channels his famed pirate character in a variety of different ways and I found myself laughing out loud on several occasions. But he also has his share of ludicrous, over-the-top moments. And that can be said for the entire film. It has several eye-rolling moments that are so insanely absurd that they’re impossible to digest. But it also sharply turns in other directions. “The Lone Ranger” has some jarring tonal issues. One minute horses are standing up in trees wearing cowboy hats and the next has a character cutting out and eating a human heart. The movie is literally all over the map.

But perhaps it’s biggest sin is that it’s just so boring in the middle. It starts with a some promise and there are hints of a good story throughout the picture. But soon the film bogs down in a mire of drab and pointless plot. There’s an underwritten and poorly serviced romance. There are throwaway characters such as Helena Bonham Carter’s ivory-legged brothel head whose story would better serve on the cutting room floor. Then there is the film’s general snail paced way of telling the main story. It takes way too long and it becomes a test of endurance just to make it through the arduous 2 hours and 30 minute running time.

But I have to say that the big finale saves the film from being a total disaster. The huge set piece is quite the spectacle and I remember perking up the moment that the William Tell Overture suddenly kicked in. The ending almost feels like its own little short film. It doesn’t feel anything like a Lone Ranger sequence and there isn’t a semblance of realism to be found. But it is insanely entertaining if you can accept its cartoonish and exaggerated approach and go with it. For me it was easily the best part of the film even with its absurdities.

There are some beautiful locations and some of the action is really good. There are moments where the wacky humor works very well. I also enjoyed seeing an assortment of my favorite supporting actors (William Fichtner, Tom Wilkinson, Barry Pepper, and James Badge Dale) even if their roles aren’t particularly well written. But in the end “The Lone Ranger” loses itself in its overbearing insanity and bloated, uneven plot. It never feels like a western and it never knows when to end. What really stinks is that this could’ve been a really good summer movie. Instead it’s $250 million dollars worth of mediocrity and a waste of some really good talent. I may be wrong but I would think Disney would want more from such an investment.