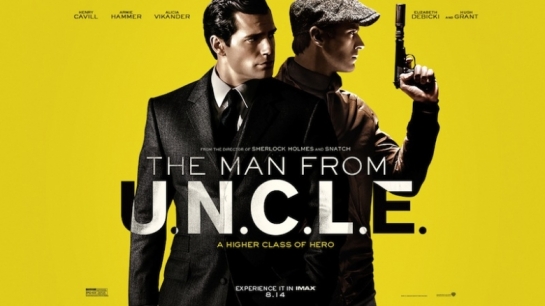 “The Man From U.N.C.L.E.” debuted on NBC during the Fall of 1964. The campy and stylish spy-fi television series ran for only three and a half seasons but it has left a surprisingly lasting impression. That’s funny because during its short run the show struggled with its identity. It was at its peak of popularity when it was trying to be serious, but once the show started incorporating more humor the ratings dropped substantially.

So here we are, 47 years since the original show’s cancellation, and we have a big screen adaptation. The film embraces both the serious and the silliness that marked “The Man From U.N.C.L.E.” and its interesting television run. Guy Ritchie helms this wacky mélange of action, comedy, spy thriller, and a retro GQ photo shoot. On paper the movie calls for skepticism as it has all the ingredients to be a disaster. Thankfully it’s far from it. Instead Richie gives us a fun and zesty affair that quite exceeds the expectations I had.

One of my causes for caution was rooted in the film’s two leads. Henry Cavill plays Napoleon Solo – a name so blatantly absurd yet tonally spot-on. He’s an accomplished thief turned reluctant CIA top agent. He’s quite confident and has a penchant for good fashion and even better hair. Then there is Armie Hammer playing KGB agent Illya Kuryakin. He’s a bit of a brute who is a by-the-book operative with a propensity towards fits of anger. Can you see where this is going? Two lone wolves forced to work together and all that stuff? Surprisingly the movie plays with that conceit without going too far.

Brimming with post-World War II and Cold War politics and atmosphere, “The Man From U.N.C.L.E.” is set in 1963 where our two good-looking stars meet while trying to nab at target for their respective countries. That target is Gaby Teller (played with sauce and spunk by Alicia Vikander). She’s the daughter of a nuclear scientist believed to be working on a nuclear bomb for a wealthy couple who also happen to be Nazi sympathizers. Solo and Kuryakin are ordered to join forces along with Gaby to foil the nefarious plot despite their differences. 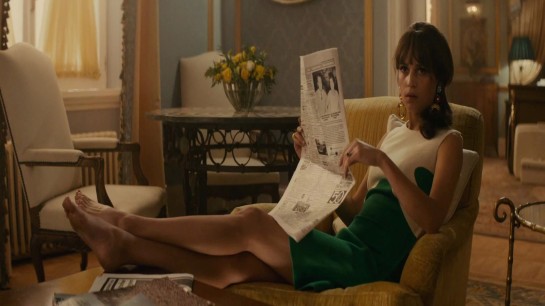 There are several things the film could have done to derail itself. First there is the humor. “The Man From U.N.C.L.E.” doesn’t make the critical mistake of taking itself too seriously. At the same time it doesn’t bombard the audience with dopey, annoying gags and slapstick. Instead the movie relies on a very calculated dry wit. In many ways the characters are the gags with their ultra-serious personalities and corny bravado. We really see this in the film’s bromance innuendo that Solo and Kuryakin are completely impervious to.

Then there is the action. We certainly get a handful of snazzy action set pieces, but those expecting to see normal action-packed summer movie fare may leave disappointed. Ritchie doesn’t drown his movie in endless shootouts, fistfights, or car chases. He uses action but even it is presented with pinches of style and humor. There are a couple of action twists that feel a bit out of place but ultimately it is done well and in the right amounts.

But the film’s strongest point may be the fabulous recapturing of its 196os setting. Guy Ritchie, cinematographer John Mathieson, costume designer Joanna Johnston, and composer Daniel Pemberton all contribute to the film’s stylish and energetic sense of time. Everything including the fashion, the decor, the technology. The period flavored music which hearkens back to so many different 60’s era sounds. The film is very aware of its style and it could be said that Ritchie wallows in it, but certainly not to the point of making it any less impressive. 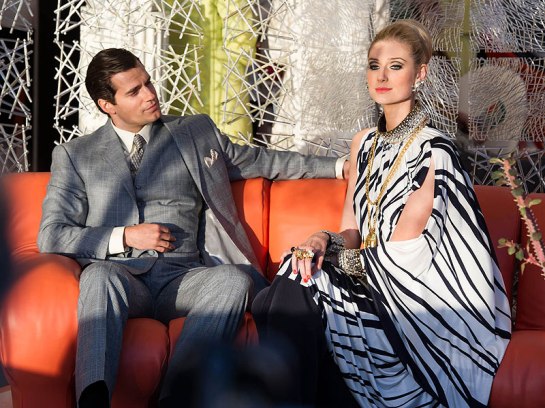 Back to Cavill and Hammer. Some have criticized their performances and the lack of chemistry between the two stars. I actually enjoyed them particularly Cavill and his suave, cheesy overconfidence that is clearly spoofing early Bond. There are moments where Cavill seems to be posing more than acting and Hammer feels as stiff as a board on occasions. But as for their chemistry, it’s a bit hard to judge since they are playing two characters who actually have no chemistry. That’s kind of the point. Overall I think they pull it off. And then you have Vikander who is a lot of fun playing the roles the men visualize for her while being smarter than any off them think. I also really liked Elizabeth Debicki giving a playfully exaggerated performance as one of the film’s villains.

So what to make of “The Man From U.N.C.L.E.? There is a smugness to the whole proceeding that sometimes shows itself in the self-indulgent style and in Ritchie’s infatuation with how good his actors look. But there is also an undeniable allure. I loved the realization of the setting, the controlled but effective humor, and the well utilized smattering of action. Most importantly I had a lot of fun, something we don’t always get to say with these types of projects. Sadly the film’s unique flair hasn’t drawn big crowds at theaters, but I found it to be a welcome retreat that may not be flawless but is certainly entertaining.