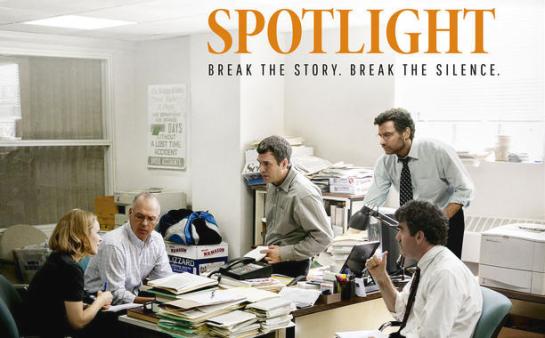 I’ve always been a sucker for movies with journalism at their center. I like all kinds of them – the character-driven dramas and especially the more focused procedurals. For years Hollywood has enjoyed using journalism as a means of telling numerous kinds of stories. Many have been fantastic films while others…not so much.

The latest journalism picture sets us down in the world of investigative reporting. It is Thomas McCarthy’s “Spotlight” – an absorbing newsroom drama about a Boston Globe investigative team’s discovery of child sexual abuse by Catholic priests. The story goes even further by following the team’s uncovering of an elaborate and disgusting cover-up by the Boston Archdiocese. 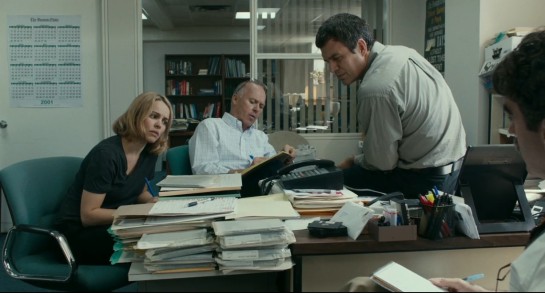 The film is inspired by the true story of the Globe’s ‘Spotlight’ unit who in 2001 exposed the abuse and cover-up eventually winning a Pulitzer Prize for their work. McCarthy also co-wrote the script which notably doesn’t feature a true lead performance. This serves the story well. “Spotlight” is a full-on ensemble picture built around several key characters and represented by some of the best performances of the year.

The ever-entertaining Michael Keaton plays Walter “Robby” Robinson who heads the Globe’s four person Spotlight team. His team consists of the fervent, high-strung Michael Rezendes (Mark Ruffalo), the tireless Ohio transplant Sacha Pfeiffer (Rachel McAdams), and the seasoned Matt Carroll (Brian d’Arcy James). It’s a tight-knit and semi-autonomous group who determine their own investigations and are given all the time and resources needed.

That appears to change when, amid potential company cuts, the Globe brings in a Boston outsider Marty Baron (Liev Schreiber). Feeling there is an important story to be told, the new boss immediately pulls Spotlight off their current project and has them investigate alleged child abuse among local priests. Their trail winds back several years implicating more priests and revealing more victims.

“Spotlight” is a painstaking procedural more focused on credible detail than big, showy moments. There is no pomp or pageantry. McCarthy is far more interested in examining the journalistic process than standard issue newsroom clichés. Everything he presents is done so with the utmost realism. You truly get a sense that you are watching an investigative process in motion. It may be the energy of the newsroom (much of which was shot in the Boston Globe offices) or something as simple as digging through old news clippings, making phone calls,  or examining old records.

But there is an incredible balance within the film. It is a journalism procedural but there is also the serious and unsettling story we witness being uncovered. “Spotlight” handles this prickly subject deftly and earnestly. It pulls no punches while at the same time respectfully representing the victims. Even in these moments the movie avoids the temptation to go big. It maintains a consistent level of restraint both from the actors and the director.

And not enough can be said about the performances. Keaton and Ruffalo are flawlessly in tune with their characters. Liev Schreiber may be the biggest surprise delivering a clever minimalist performance. John Slattery even dials it back as the paper’s deputy editor. And Stanley Tucci is fabulous as an attorney on the wrong side of the church due to his unsuccessful crusade against clerical molesters. Tucci is an actor known to go big, but even he is more concerned about serving the story than his character. It’s something the entire cast shares. 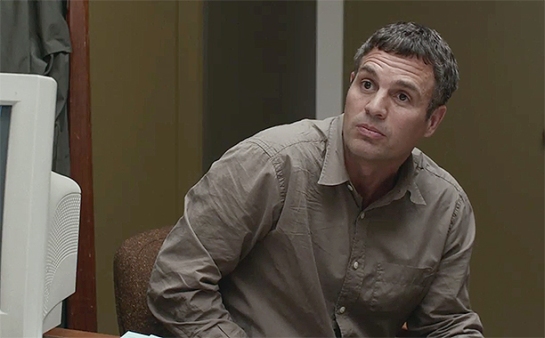 Ironically the film is titled “Spotlight” yet a spotlight is something no one involved seeks. Whether you’re talking about the director or a cast member, everyone seems more interested in the story being told. That chemistry allows for the film to center its focus on smart, meticulous storytelling. McCarthy’s film is subtly thrilling and it flows at such an invigorating pace. Better yet it doesn’t hold our hand or insinuate we need every narrative beat explained for us. And in the end there is no chest pounding or lofty hero statuses. Just a stinging indictment that reaches beyond the church. As one character says “There is enough blame to go around”.

The Spotlight team ran a series of revealing articles that had a profound impact throughout Boston and beyond. It was true journalism at its purest during what could be called the last great age of the newspapers. “Spotlight” the movie is a worthy tribute to the important work done by that team. It also happens to be one of the best films of 2015 and easily one of the best films about journalism itself.