And you thought movies were for entertainment only! “Argo” is the third feature film directed by Ben Affleck. It’s also his best work to date. “Argo” takes place during the 1979 Iran hostage crisis and is loosely based on CIA exfiltration specialist Tony Mendez’s bizarre but daring rescue attempt of six US diplomats. For the most part Affleck steers clear of politics instead choosing to focus more on the intensity of the events. This results in a well conceived and focused story that sizzles from the opening scene to the end credits.

The film opens up with what’s arguably the best 20 minutes in cinema so far this year. Affleck instantly sets the stakes high by showing the immediate causes of the unrest in Tehran through a brief but effective opening montage. In 1979 Iran was in chaos after the people had overthrown their unpopular Shah and replaced him with an Islamic Republic. Anti-American sentiment boiled over after the United States granted asylum to the deposed leader. Led by Islamic militants, a mass of people break into the US Embassy and begin taking hostages. Six diplomats manage to escape and find refuge at the home of the Canadian ambassador. The protesting and subsequent storming of the US Embassy is packed with tension and it’s brilliantly visualized through a mix of old news footage and clever camera work. And I’m not just speaking of the hostile crowd outside of the gates. We see diplomats inside, fully expecting a breach, frantically gathering sensitive documents to incinerate and shred. We see last-minute contacts being made which sends Washington scurrying. All of this is realized as truly riveting, edge-of-your-seat cinema.

As mentioned, six American diplomats manage to escape and hide in the home of Canadian ambassador (Victor Garber). Knowing the militants will soon realize that six Americans are unaccounted for, the State Department brings in Tony Mendez (played by Affleck) to come up with a plan to get them out. He convinces his superiors to allow him to enter Tehran, meet up with the hidden diplomats, and leave the country with them posing as a Canadian film crew scouting out a location for a sci-fi movie. Knowing how thorough the militants will investigate the ruse if suspicious, Mendez is sent to movie make-up artist John Chambers (John Goodman) and Lester Siegel (Alan Arkin), a semi-successful Hollywood film producer. Together they put all the pieces in place for their fake movie including a title (“Argo”), a script, a production company, and even a movie poster, all intended to give credibility to Mendez’s cover.

The film then follows the planning of the mission, the anxiety of the diplomats in hiding, and the ever-present uncertainty in Washington from those who don’t fully buy into Mendez’s plan. All of this is told by the able hands of Affleck who has certainly established himself as a skilled storyteller. His style fits perfectly with Chris Terrio’s sharp and layered screenplay. Terrio crafts a potent dramatization by adding just enough to the real events to give the narrative a real dramatic pop. A couple of fictional characters are thrown in and there are moments that are purely for dramatic effect. But that’s what cinema does and I can’t imagine this story playing out any better than it does here. It also has the sharp sting of relevance. I couldn’t help but think of the recent Benghazi embassy attack During the film’s opening sequence.

You also can’t help but be impressed by the movie’s impeccable attention to detail in creating a believable late 70s and early 80s atmosphere and vibe. The movie opens with the old late 70s Warner Bros. logo which perfectly set the table for me. Then there are the obvious things – the cars, the clothes, the hairstyles, the technology. But Affleck also employs several clever devices such as original news footage featuring the likes of Tom Brokaw, Dan Rather, and Ted Koppel. We see archived footage of President Jimmy Carter as well as authentic newscasts of the turmoil in Iran at the time. It blends in perfectly with the fictional additions to give a true credence to everything we see on-screen.

“Argo” is a rock-solid movie that does all of these things well, and I haven’t even gone into the fantastic performances. Some have said otherwise, but I found Affleck to be a compelling lead. Then you have the incredible supporting work of Bryan Cranston, Kyle Chandler, Titus Welliver, and Michael Parks. And of course Goodman and Arkin are a blast. The performances are just another strength and this gripping and well-made film. It grabs you and holds you right through to its nail-biting finale. And be sure to stay through the credits for some great images of the real people involved in this amazing rescue attempt. It’s just icing on the cake of one of the better films of 2012.

Some movies can take a pretty preposterous concept and still make a fun and entertaining film out of it. There’s no denying that “Man on a Ledge” has a pretty preposterous concept. The question is, is “Man on a Ledge” a fun and entertaining movie? Well…kinda. Underneath the surface the movie has a fairly interesting premise. But it gets bogged down in it’s occasionally lame dialogue, it’s run-of-the-mill characters, and some truly head-scratching moments.

Sam Worthington plays Nick Cassady, an ex-New York City Policeman who is serving a 25-year prison sentence for stealing a $40 million diamond from a shrewd and unscrupulous businessman named Dave Englander (played by an alarmingly thin Ed Harris). After being notified of his father’s death, Nick is allowed to attend the funeral where he evades the guards and sets out to prove his innocence. His plan? To check into the Roosevelt Hotel, have a final meal, then climb out on the ledge of the building prepared to jump. It’s certainly not the normal approach one would take in trying to prove their innocence. Officer Marcus (Titus Welliver) arrives and takes charge of the scene and, at the request of Nick, calls in negotiator Lydia Mercer (Elizabeth Banks). 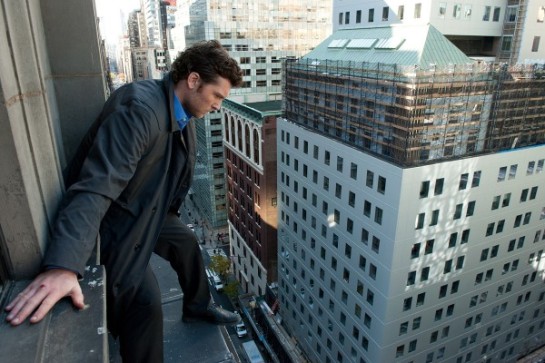 Now it’s clear that there is more going on than just a man about to jump to his death. Nick has a bigger plan in motion that hinges on Lydia’s cooperation, the craftiness of his brother Joey (Jaimie Bell) and Joey’s girlfriend Angie (Genesis Rodriguez), and the rabid crowd that has gathered below. The story takes several different turns and throws a few twists at the audience, but it’s hard to fully invest in them. Things get a little outlandish and it’s pretty hard to believe at times. Now in the defense of director Asger Leth, he’s well aware that he’s working with some wild material. He keep things moving at a crisp pace and he doesn’t drag the movie out longer that it needs to be. Also, Leth really uses the camera well and I had read where they filmed several scenes with Worthington actually out on the ledge. Unfortunately the good looks of the film isn’t enough to save it from it’s glaring flaws.

There are numerous instances where the writing left me scratching my head. Some scenes will leave the audience asking themselves “Can the NYPD really be this inept?” and “Is the movie making fun of New Yorkers or are we really to believe that 99% of them are bloodthirsty animals?”. There are also several cheesy exchanges between characters that either feel out-of-place or are just plain goofy. The film also features some of the same character types that we’ve seen in so many other movies. We have the wicked, wealthy corporate businessman. We get the typical corrupt cop. We even have the self-serving reporter who is more interested in getting the story that public safety. We’ve seen them all before.

You have to be impressed just looking at the movie’s strong cast. I like Sam Worthington even though he’s yet to really show much range in his performances. He’s actually quite good here even though the role doesn’t require as much from him as you might think. His New York accent does give way to his natural Australian accent in some scenes but he still gives a solid performance. Banks is also pretty good as is Edward Burns as a fellow negotiator. But the biggest problem is none of these performers can truly rise above the material which lets them down on numerous occasions. The always strong Ed Harris and Anthony Mackie as Nick’s former partner are terribly underused and should have been given more to do.

If you can put aside the flaws and suspend disbelief, there is some enjoyment to be found in “Man on a Ledge”. It’s impossible to take seriously and I have no doubt you’ll be shaking your head more than once. But “Man on a Ledge” is a harmless film with some cool action and fun moments. And while it’s a decent little afternoon diversion, it’s an action thriller that’s ultimately forgettable. Check it out if you have some free time. Otherwise, you can probably find something better to watch.