Creepy kids are often an automatic score when it comes to horror films. 1960’s “Village of the Damned” is an early example of that theory in action. This unique piece of British sci-fi horror anchors its suspense in its largely unexplained phenomena. But that’s just fine because watching its straightforward story play out is a lot of fun.

“Village” was initially intended as an American picture but MGM moved it to their British studio and brought in German director Wolf Rilla to head the project. The story was based on John Wyndham’s 1957 novel “The Midwich Cuckoos”. The film faced several criticisms from censors over different bits of content most of which still found its way into the final version. 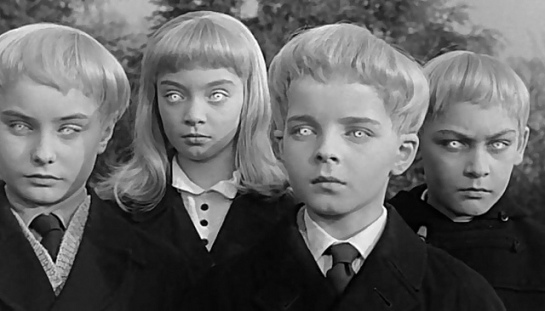 The film opens in the small British village of Midwich. Suddenly and mysteriously everyone in the village falls unconscious including a prominent professor Gordon Zellaby (George Sanders). Gordon’s brother-in-law Alan (Michael Gwynn) grows suspicious after failing to reach anyone in the village over the phone. The unexplained phenomenon soon wears off and the community seems to be unaffected. That is until a short time later when every able woman in the town turns up pregnant including Gordon’s wife (played by the “First Lady of British Horror” Barbara Shelley).

The film presents the confusion, anger, and distrust that would naturally follow such and event. But Midwich then suspects something else is taking place as the babies mature and are born at an accelerated rate. Once born they continue to grow faster than normal, each with bright blonde hair, a heightened intellect, and “arresting” eyes. A series of unexplained events follows leaving the village and outsiders wondering what these children represent and what their motivations may be.

Wolf Rilla doesn’t let his film devolve into an endless parade of cheap scares or contrived creepiness. Instead the movie focuses on the mystery and the evolving threat itself. Questions aren’t always answered. The movie doesn’t serve everything to the audience on a platter. Instead it leaves many things up in the air and we are just as lost and confused as most of the characters. It’s a smart approach that keeps the film from being corny or routine.

It is also helped by a solid cast of characters each of whom are truly invested in the predicaments of their characters. In fact I was a bit surprised at just how well presented the characters are both from the script and the performances. Actually the entire movie functions this way. The well presented script and performances solidify the film’s aim to be a mysterious and creepy science fiction, horror, thriller. The true grip of “Village of the Damned” is rooted in its unsettling mystery and the filmmakers know how to keep their project within those bounds. The film definitely benefits from that.